Fronius is a well-known Austrian manufacturer of reliable solar inverters. This company has many years of experience in the solar energy market.
Discover more

Sungrow Power Supply Co has been a manufacturer of high-tech inverter equipment for energy projects for over 20 years.
Discover more

Our group has long-term and fruitful cooperation with SMA Solar Technology company. We use their equipment in many projects since 2012.
Discover more

Huawei provides services and high-quality products all over the world. One of most important directions of company’s business activity is development of solutions and products for solar energy, including manufacturing of high-quality solar invertors
Discover more

Solar invertors belong to the most important elements of any solar power station. On-grid solar inverters convert direct current (DC), generated by solar panels into alternating current (AC) and work only in case of voltage in the external grid. Backup and autonomous solar inverters can operate without an external grid just using batteries. In addition to current conversion, modern inverters can work as intellectual system, imposed by general control and operational management all over the grid.

Three types of inverters can be distinguished: autonomous, grid connected and multifunctional (hybrid). Off-grid inverters are part of a separate photovoltaic system and are not connected to an external electrical grid. Synchronous or on-grid inverters work in conjunction with a centralized power supply system – if there are malfunctions in the grid, the inverter automatically shuts down. To work in a grid where both the consumption of “standard” electricity and the energy from solar PV modules are combined, the use of so-called hybrid solar inverters is possible.

Depending on the installed capacity of the solar power plant, it is possible to use small string solar inverters or more powerful central inverters. The choice of this or that type of inverter occurs at the stage of designing a solar power plant and engineers take into account a large number of technical, economic and other parameters.

Many years of practical experience in the use and maintenance of solar inverters allowed us to accumulate the necessary statistics and renounce the use of models and brands that have proved themselves negatively in terms of quality, reliability or service support. We work only with reliable manufacturers of solar inverters. This is exactly the main advantage of cooperation with Avenston: we have guaranteed quality of your inverter equipment from trusted manufacturers, such as Huawei, Sungrow, SMA, Solis and some others. Avenston is your reliable supplier of inverters for solar power plants. For many years we have been a distributor of the highest quality and optimal solar inverters, carefully selected for the needs of the Ukrainian solar energy market. 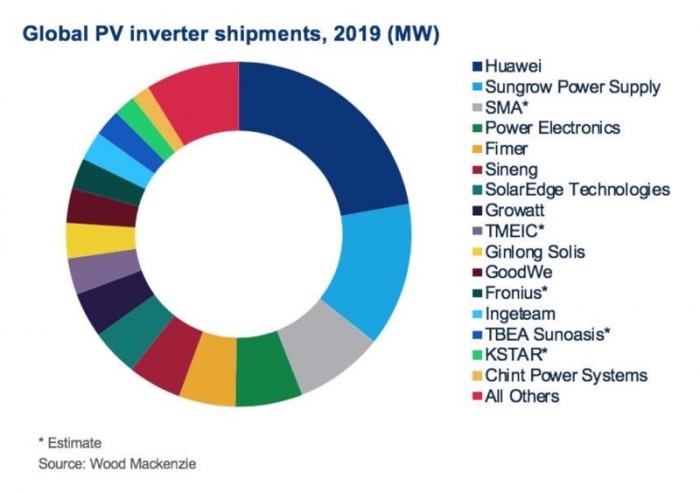 The structure of the global market for solar inverters in 2019