The development of solar energy in Ukraine is rapidly gaining momentum. In 2018, twice of solar capacities were introduced (about 500 MW) than in the past (250 MW). And next year is expected to be at least the same in terms of growth, or even higher. The excitement around the construction of solar power plants (SES) of the current and next year is artificial. Investors who have decided to build solar power plants understand that the rules of the game will soon change, all in anticipation of a new green tariff legislation, so they are striving to complete all projects before the end of next year. In another legislative situation, construction would have been slower, some projects would have stretched to the 20th, 21st year. We can say that the market today is overheated. Now there are more investors than potential contractors who can build the declared capacity.

If we talk about medium-term prospects, the new legislation will stimulate the entry of systemic foreign investors into the Ukrainian market for PV generation. In 5-10 years we will reach a growth rate of 20-30% per year. Today in Ukraine, the share of “green” in the energy balance, excluding hydro, is only about 2%. According to world forecasts, by 2050, on average, the total world share of solar and wind generation will be about 50% of the total generation. As for Ukraine, today at the state level there is no clearly voiced position on the share of “green” generation in the energy balance that investors should be guided by.

The company “Avenston” today is one of the key players in the market of solar energy in Ukraine. Our main specialization is the turnkey construction of industrial solar power plants. During 2018, the company actively increased its potential in the design and construction of power plants. Our strategic plans in 2019 provide for reaching a new power level – 300 MW of PV-generation in ten regions of Ukraine. Today, the company has formed a pool of contracting organizations – suppliers of equipment, special equipment, metal production, which will ensure the execution of works on time.

At the same time, I will emphasize that the company is in favor of developing a large number of small solar power plants, the so-called distributed generation, which will be installed where a consumer is, for example, near the house, on the facade, on the roof. Thus, consumption and generation will be more balanced. This approach to market development, along with the adoption of new legislation, compensates for the problem of balancing generation and consumption at the level of the entire power grid. 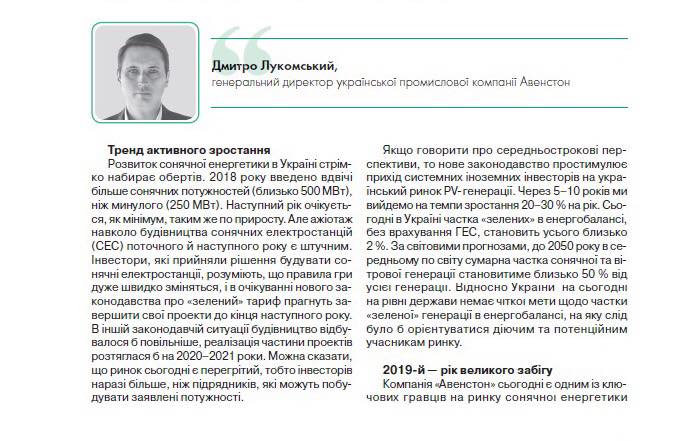 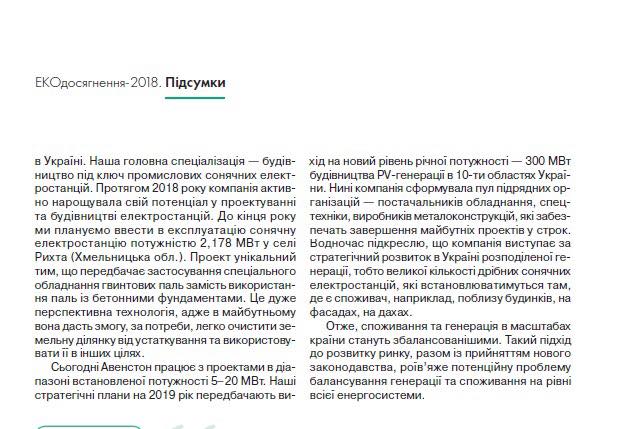 BIPV is a promising new technology in the field of solar industry. More and more solar power plants around the world are used in close association with the architectural design, organically blended into the urban environment.
Discover more

BIPV is a promising new technology in the field of solar industry. More and more solar power plants around the world are used in close association with the architectural design, organically blended into the urban environment.
Discover more

We already know a lot about renewable energy sources, but in recent years the topic of hydrogen has been raised more and more often. What is the role of the light chemical element of the Mendeleev periodic table in the renewable energy generation system? How do hydrogen production processes take place, and what are the global practices for its use?
Discover more

What area is required to build a solar PV power plant?

One of the issues that may arise when planning a future solar power plant is the required area for the mounting of solar panels.
Discover more