Renewable energy sources (RES) are, without exaggeration, the basis for the sustainability of the energy sector and the key technology to achieve decarbonization by 2100. The Paris Climate Agreement aims to keep down the rising global average temperature below 2 ° C. Achieving this will require a significant reduction in emissions in all sectors. We know a lot about alternative energy, but in recent years, the topic of hydrogen has been increasingly tackled. What is the role of the lightest chemical element of the periodic table in renewable energy? What are the processes of hydrogen production, and what are the interesting world practices for its use?

Hydrogen has been used successfully as a raw material for many years. The total estimated value of the market for hydrogen raw materials is $ 115 billion, and it is expected that it will only grow, reaching $ 155 billion by 2022. Nowadays, hydrogen is widely used in various industries and sectors (Fig. 1).

Hydrogen is an energy carrier, not a source of energy. It is produced mainly from natural mineral resources. Hydrogen and electricity complement each other. Hydrogen can facilitate the integration of electricity into all end-use sectors (Fig. 2). 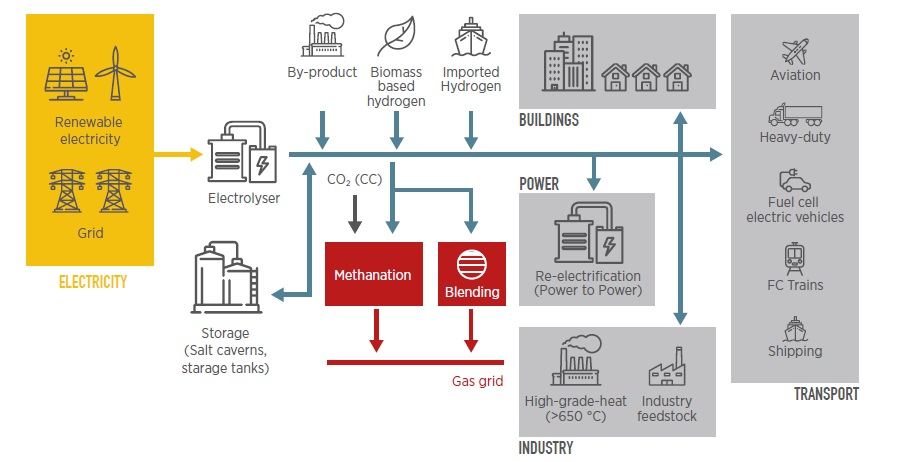 Hydrogen can be produced using a number of different processes (Fig. 3). For example, by releasing hydrogen from organic materials such as fossil fuels and biomass in a thermochemical processes. Or, splitting of water (H2O) by electrolysis into hydrogen (H2) and oxygen (O2). It can also be produced using bacteria and algae (through biological processes). Below you can learn more detail about each of the methods. 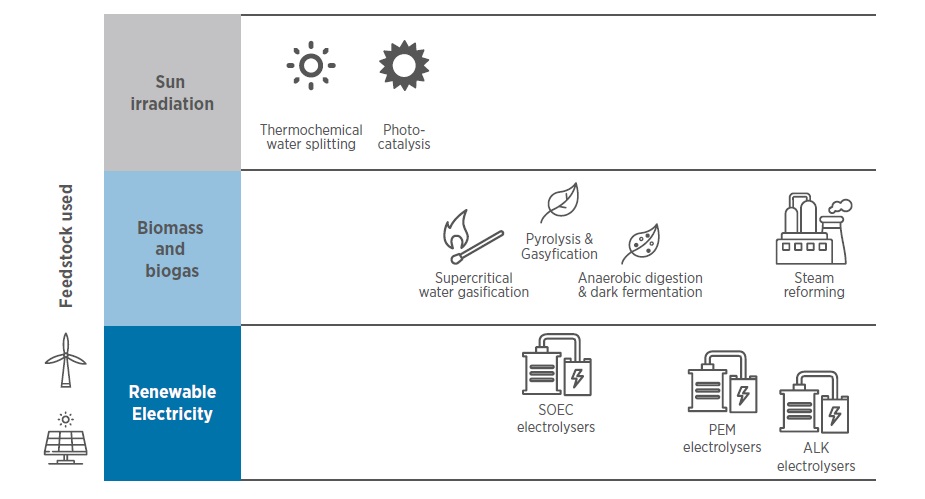 Some thermal processes use the energy in various resources, among which biomass, natural gas or coal, to release hydrogen from their molecular structure.

Low gas prices in the Middle East, Russia and North America lead to lowest costs of hydrogen production. Gas importers, in particular, Japan, Korea, China, and India, are forced to struggle with higher gas import prices, which leads to an increase in hydrogen production costs (Fig. 4).

Among the existing Thermochemical Processes, there are:

Photolytic processes use light energy to split water into hydrogen and oxygen. Currently, the method in the very early stages of research and is divided into:

Belgian engineers argue that solar panels can not only produce electricity, but also hydrogen gas, allowing them to heat homes, while not increasing carbon dioxide emissions.

Researchers at the Catholic University of Leuven (KU Leuven) have developed a panel that uses solar energy and air humidity to generate hydrogen. The pilot panel can produce 250 liters of hydrogen gas per day (Fig. 5). The prototype takes water vapor and breaks it down into hydrogen and oxygen molecules. Researchers plan to conduct field trials of their brainchild in one of the houses in the town of Oud-Heverle. During the summer months, hydrogen will be stored underground in a small pressure vessel and then pumped across the house throughout the winter. If everything goes according to plan, the team will install another 20 panels in the neighborhood so that other families can also use green (i.e. environmentally friendly) hydrogen. 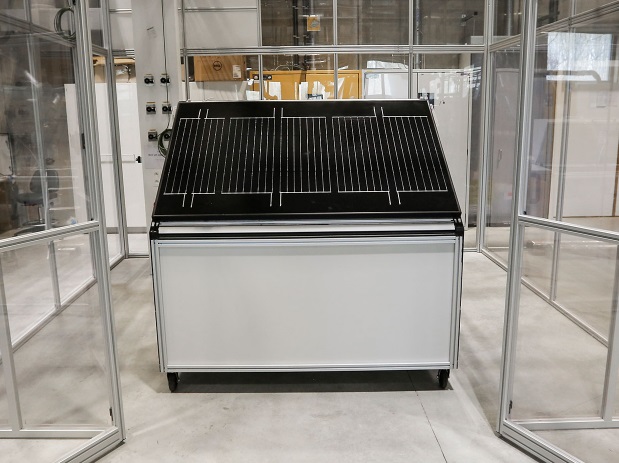 Researchers from Japan’s National Institute of Materials Science, the University of Tokyo and Hiroshima University have jointly conducted a techno-economic analysis for hydrogen production from photovoltaic power generation (PV) utilizing a battery-assisted electrolyzer.

The results of this study suggest that the cost of hydrogen ranges from 17 to 27 yen / nm3 (from 0.16 to 0.25 US dollars). A joint research group designed an integrated system capable of adjusting the amount of battery charge/discharge and the amount of electrolysis hydrogen production concerning the amount of solar power generated. The team then evaluated the economic feasibility of the system. (Fig. 6). Rechargeable batteries that can discharge at a low rate are expected to become available by around 2030. 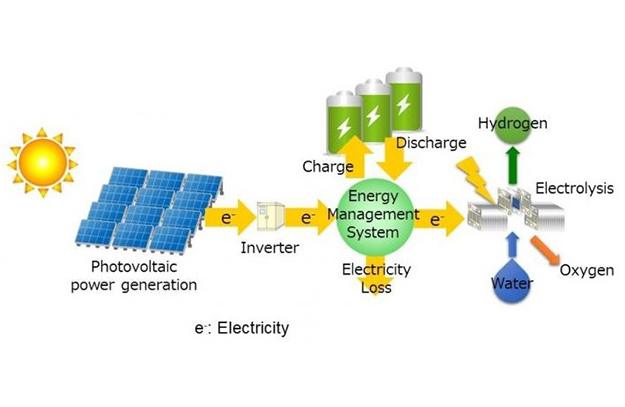 The Australian Renewable Energy Agency (ARENA) will provide $ 3.1 million to help build Toyota Australia Hydrogen Center. The total cost of the center is $ 7.4 million. According to ARENA, the center will use solar photovoltaic cells and batteries to produce hydrogen. Hydrogen will be produced through electrolysis and then compressed into fuel cells. Toyota Australia Hydrogen Center will also include an educational center and the first commercial scale hydrogen vehicle refuelling station infrastructure.

About 97% of Norwegian electricity is generated by hydropower plants, and there is currently 15 kWh of excess power, so new ways to use this green energy are needed. In the form of hydrogen, surplus and captured renewable energy can be stored, distributed and made available to growing markets with zero emissions both in Norway and abroad.

In tha USA conducted a study: they designed a simplified model to determine and optimize the thermal and economical performance of domestic photovoltaic-electrolyzer systems, either with fixed or sun tracking panels using annual total solar radiation on a horizontal surface and climatic data. Twelve locations from four climatic zones (tropical-subtropical, dry, temperate, cool-snow) were choose. Simulations was carried out to produce data for hydrogen production for these various locations and the resulting data have been correlated to obtain hydrogen production in kg/kWp/year photovoltaic system as a function of total annual solar radiation on horizontal surface. It was found that hydrogen production with fixed photovoltaic panels varies from 26 to 42 kg / kWp / year and has a cost of $ 25 to $ 268 / GJ.

On September 25, 2019, the Gesgen Hydroelectric Power Station (Alpiq Gösgen) formed a one-day zero-emissions logistics hub: Hydrospider AG and Hyundai Hydrogen Mobility (HHM) presented a business model based on green hydrogen, which has no analogues in Europe.

It is planned that by 2025, 1,600 Swiss-based Hyundai fuel cell electric vehicles will carry green hydrogen cargo. The first Swiss plant for the production of hydrogen in commercial operation is currently under construction at the Gesgen hydroelectric station. From the end of 2019, the 2 MW Hydrospider AG electrolysis plant will produce hydrogen for the first 50 fuel cell electric vehicles which will to be deliver to Switzerland in 2020.

As can be seen from the graph below, since 1975, the demand for hydrogen has more than tripled and continues to grow: it is almost entirely supplied from fossil fuels at that 6% of the world’s natural gas and 2% of the world’s coal using for hydrogen production (Fig. 7) . 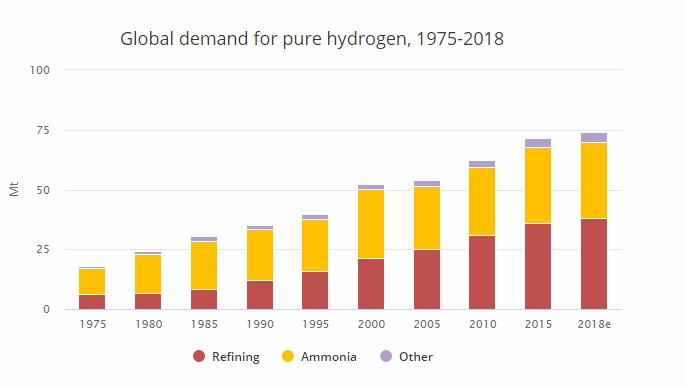 With a decrease in the cost of renewable electricity, in particular solar photovoltaic and wind energy, the interest to electrolytic hydrogen is growing, and several demonstration projects have been implemented in recent years. If all current dedicated hydrogen production were produced through water electrolysis, this would result in an annual electricity demand of 3 600 TWh – more than the annual electricity generation of the European Union (Fig. 8). 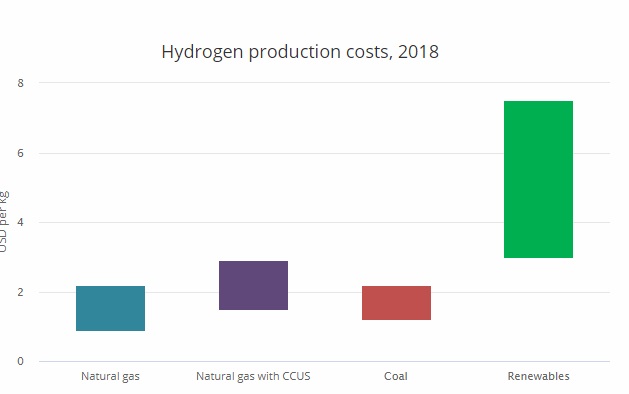 With a decrease in the cost of solar photovoltaic and wind production, the construction of electrolyzers in places with excellent conditions for the use of renewable energy can become an inexpensive option for the supply of hydrogen, even after accounting for the costs of transmission and distribution of hydrogen transport from renewable energy sources to end users (Fig. 9).

Hydrogen is already widely used in some industries, but it has not yet realized its potential to support transitions in the field of clean energy. To further overcome barriers and reduce costs is needed ambitious, focused and short-term action.