Главная | Articles | Energy forecast by the middle of the century

Energy forecast by the middle of the century

How will global energy transit happen? Which steps are ahead? Which conclusions should investors make for medium- and long-term prospects? Answers to some of these questions give expert assessments that take into account the opposite effects on the development of events, and even indicate the key dates for changing the model of global energy.

In its study, Energy Transition Outlook 2018, a forecast to 2050, the DNV GL consulting firm (100+ worldwide branches) specializing in systemic investors’ forecasts for assessing the attractiveness of long-term investments in the energy sector, published a “timeline” of events regarding changes in global energy, see Fig. 1. Taking into account the influential reputation of experts from DNV GL, this forecast will have a direct impact on the behavior of investors.

The “green slope” in the diagram (Figure 1) demonstrates the share that the “non-fossil” energy sector will occupy in the overall structure. The first milestone date is 2014 – when coal began to lose its role in energy supply and its use in the world began to decline rapidly. Ahead are the peaks of oil consumption (2023) and natural gas, including shale (2034). In 2032 humanity will consume the maximum amount of primary energy, in 2035 – the peak of consumption of secondary forms (“final energy”). That is, in spite of the slowed growth of humanity, the whole civilization after 2035 will reduce energy consumption. World demand for primary energy is increasing (581 EJ in 2016) to a peak of 662 EJ in 2032, then gradually decreasing to approximately 586 EJ in 2050. The reason for it is the use of renewable energy along with energy saving and technological changes that reduce the overall consumption of energy per unit production in all spheres.

Global investment in RES in 2035 will exceed investment in fossil energy – both in new projects, both in support and in the modernization of existing ones. 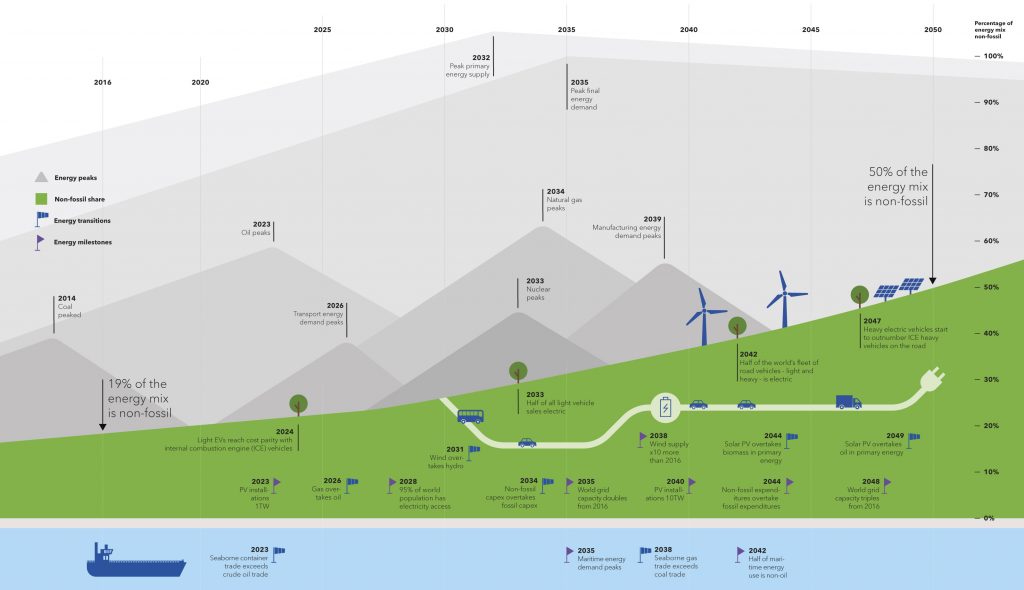 In 2023, the total installed power of PV-modules will exceed 1 TW (currently – 465 GW). This is more optimistic than the BNEF’s New Energy Outlook 2018 scenario. According to DNV GL forecast in 2040, determined capacity of PV-installations in the world will be more than 10 TWh, which is expected to grow tenfold in 17 years. In 2044, global PV generation will exceed primary energy extraction from all types of biomass, including those extracted from the sea or as a result of the purification of fresh water from blue-green algae. Currently, bioenergy is leading in RES, but according to IEA calculations, in the medium term, the fastest increase from all types of RESs will have PV generation itself, see. Fig. 2, and this trend will continue to prevail. Between 2018-2023, total RES consumption will increase by almost 30%, which is 40% of global energy demand.

In 2050, 50% of the world’s “energy basket” will be RES and other non-extraction sources of primary energy, see. Fig. 3, and 70% of the world’s electricity will be produced from the sun and wind.

By 2050, electricity generation in the world will triple, see. Fig. 4, and in the total amount of energy consumed, electricity will be 45%. However, investments in electrification will be even faster than the PV sector itself, as expenditures will be required for the expansion and modernization of the infrastructure of common and distributed energy networks and the “digitalization” of control systems. This is especially true of low and medium voltage networks due to the accelerated development of distributed generation from variable reliance sources (VREs) that need to withstand higher peak loads than now. The largest factor in electricity consumption will be a massive transition to electricity for the generation of heat for heating and hot water. And among the sources of power generation specifically, will occupy a prominent place just PV-generation.

Annual investments in non-fossil energy, together with the related costs on the network, will increase by almost 3.5 times to $ 2.4 trillion, see. Fig. 6. Global investments in the development and maintenance of electricity grids will increase from $ 0.49 trillion. up to> $ 1.5 trillion by the middle of the century. However, by 2050, global spending on energy will fall from 5.5% to 3.1%, while the global economy will increase by 130% from its current state. The transition of the world model to the increased consumption of electricity itself is fully justified and probable.

Generation of electricity in the medium term will be mainly due to PV technology, its growth rate will exceed all other RES, taken together, see. Fig. 6. And among the PV generation itself, the most rapid development will be the one of distributed small and medium capacity.

The pace of development of distributed generation is very sensitive to world prices for fossil sources, especially for fuel oil and natural gas. The IEA agency took into account this factor in its calculations and provided figures for the growth of PV capacities in the near future in a pessimistic and accelerated scenario, see. Fig. 7; The last one also takes into account the influence of the growth of prices on conventional fossil sources.

The general distribution of development rate among different RESs according to the IEA’s data, see. on rice 8, the highest pace – for PV-generation.

Solar power in relation to global investment is now at the initial stage, but in the near future it will become the most attractive sector for system and private energy investors. According to an expert from GTM Research, “we are all just starting to get on the surface of the solar power industry,” estimating expectations about global investments in PV-power in 2018-2035 worth $ 2.8 trillion. Even with this huge increase in investment, solar energy will provide up to 17% of global energy consumption in 2035, compared with 2% now. Solar power can grow up to 2050 by 65 times. At present, solar power generates about 1% of the total electricity, and only 10 years ago this quantity was so small that it could be neglected. The development of “solar” companies is just beginning.

Fig. 10. Curve of expected reducing the price PV-modules from level 2016 and related consequent doubling of installed capacity of PV installations in the world, 2016-2048. Source: DNV GL «Energy Transition Outlook 2018, a forecast to 2050».

The study of prospects for energy transit by the DNV GL group provides the following to the systemic investors.