Electricity and other types of energy can be produced directly from the sun, even in cloudy weather. Solar energy is used worldwide and is increasingly popular for generating electricity or also for heating and desalinating water. Solar power can be generated in two main ways:

Solar energy is one of the most promising and dynamic renewable energy sources. Each year, the capacity increase put into operation is approximately 40-50%. In the last fifteen years, the share of solar electricity in the world has exceeded 5%. Improvement in the technology of manufacturing photovoltaic modules has led to a significant reduction in the cost of electricity. In more than 30 countries (including Germany, Chile, Australia, Mexico), solar energy has become cheaper than traditional sources (oil, gas, coal). Over the past 10 years, investments in solar energy have amounted to about $ 300 billion. The most illustrative example of the solar technology success is Tau Island (American Samoa). Previously, the islanders were completely dependent on the supply of diesel, but after the installation of a modern solar power plant they became completely independent.

Ukraine is taking important steps to increase the use of renewable energy sources and alternative fuels as part of its broader strategy to reduce dependence on traditional fossil fuels. It is estimated that our country has the potential to increase renewable energy tenfold by 2030 and reduce natural gas consumption by 15%.

Currently, the development of solar energy in Ukraine is at a stage that Europe has undergone 7-10 years ago. At the same time, we have one of the most attractive investment structures in Europe for the development of the industry. Indeed, favorable conditions have been created here: availability of resources and land, a preferential tariff, state support and a targeted energy strategy that aims to reach 25% of the clean energy production by 2035. As a result, the interest to renewable energy in Ukraine continues to grow, and the government estimates that by 2020, total investment in alternative energy will reach US $ 18 billion. 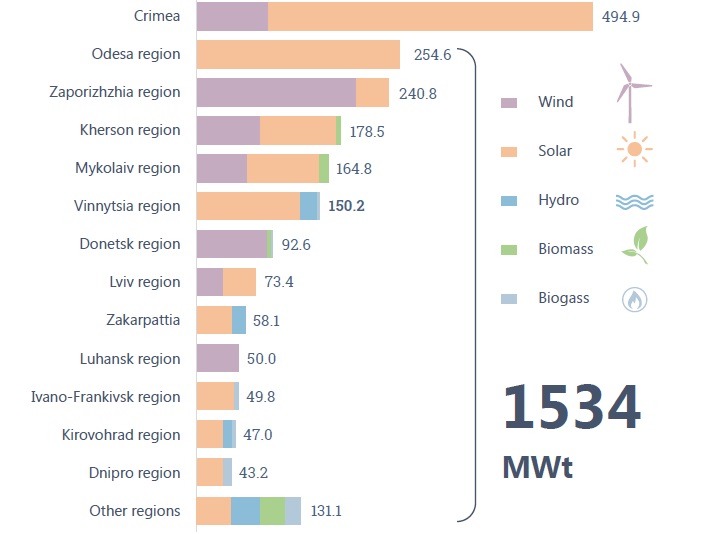 As solar energy is a very popular renewable energy source in Ukraine, it can be observed that the regional distribution of installed RES correlates with the level of insolation. The focus is on the regions with the highest solar activity, as shown in the map below (Fig. 3). 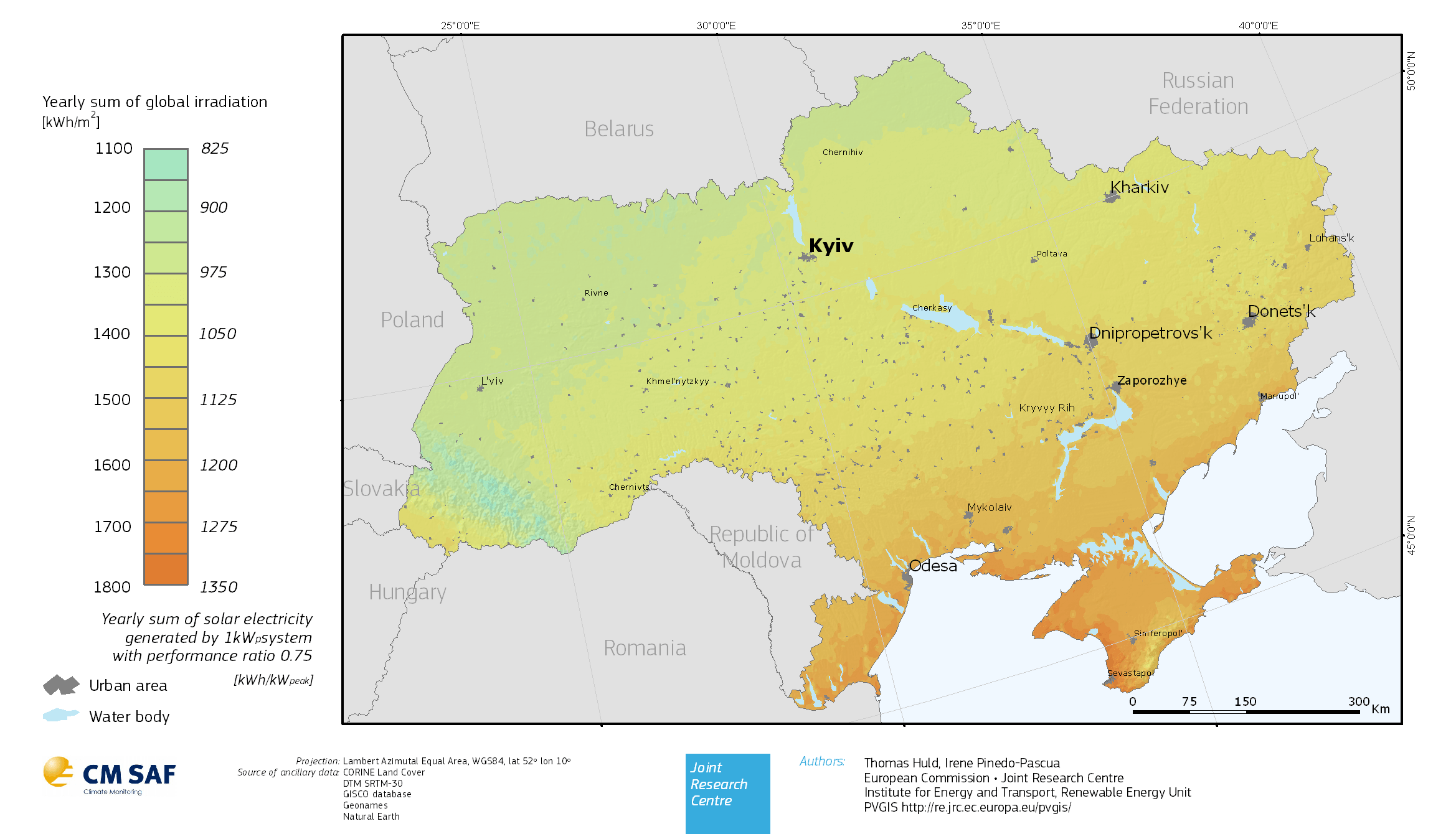 Solar energy is one of the environmentally sustainable resources for producing electricity using photovoltaic (PV) systems. The main input data used in the planning process is solar radiation. Photovoltaic Geographical Information System (PVGIS) has developed a solar radiation database from climatologic data homogenized for Europe and available in the European Solar Radiation Atlas. The model algorithm estimates beam, diffuse and reflected components of the clear-sky and real-sky global irradiance/irradiation on horizontal or inclined surfaces.

PVGIS periodically publishes posters and maps of solar electric potential. This information is very detailed. Below you will find current data visualization for photovoltaic solar potential in Ukraine and Europe. These maps are published on 21th of September 2012. The map above shows the distribution of the global solar irradiation and the solar electric potential on the territory of Ukraine in the case of the orientation of solar modules to the south at the optimal angle (the most perpendicularly to the sun’s rays). To copmare, please, see also another one with PV solar electricity potential in European countries: 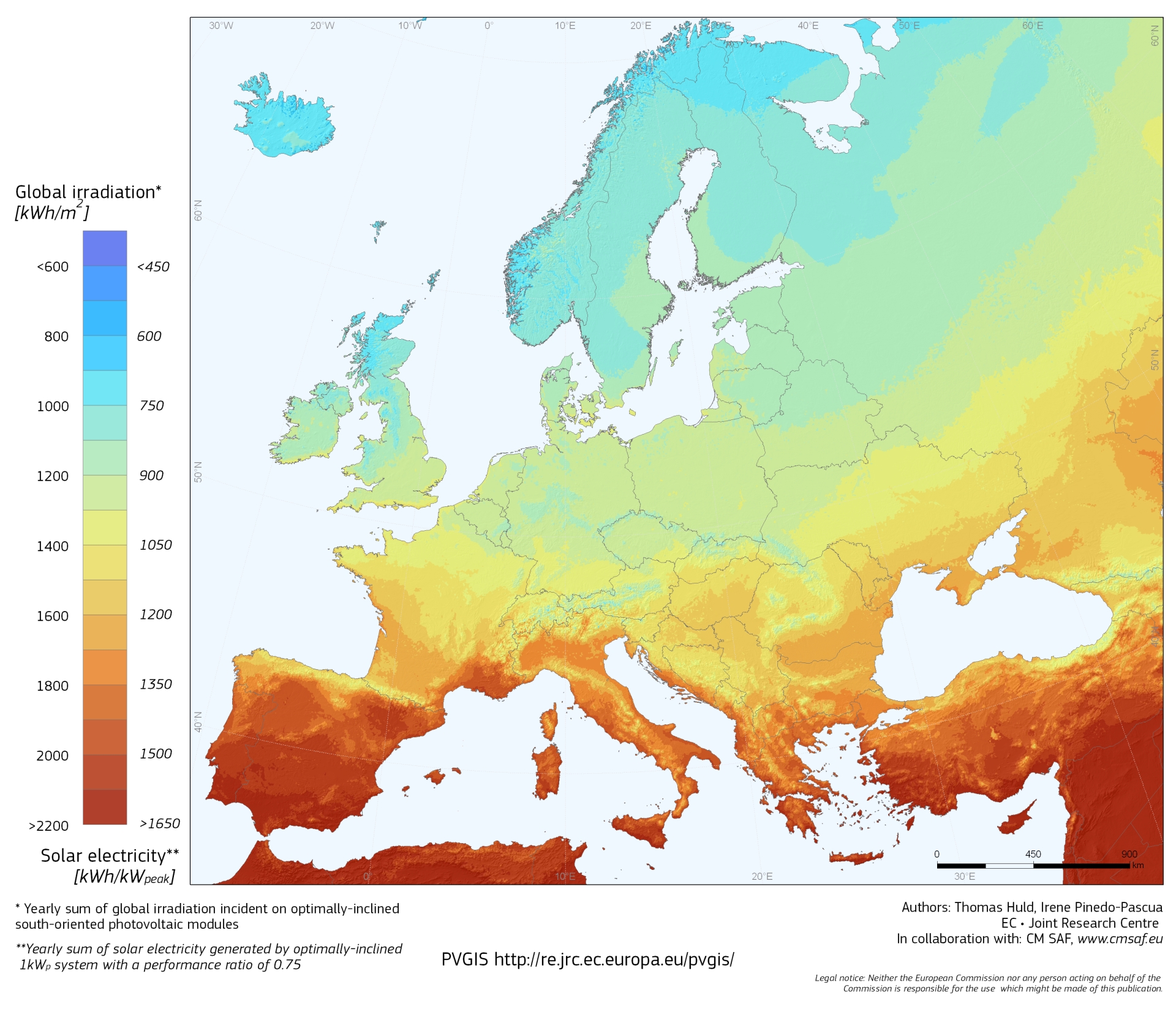 In the future, Ukraine can take on the successful experience of our foreign counterparts to enhance the prospects for solar energy.

In general, solar power will increase capacity in Ukraine because:

Why is it promising to build solar power plants?

It is expected that by 2040 China will provide 28% of all investment in electricity generation.

Why is the popularity of solar power plants increasing in Ukraine?

The benefits of solar power plants for your business

Avenston is one of the leaders of solar energy in Ukraine and the recognized expert in the field of project management and construction of solar power plants. Our company has the great practical experience and offers collaboration in turnkey project management in the renewable energy sources field. It means that we will provide consulting and full construction and maintenance service for solar power plants, including technical, financial, legal and formal aspects.