Home | Articles | Is a complete transition of Ukraine to renewable energy possible?

Is a complete transition of Ukraine to renewable energy possible?

A lively global debate continues in maintaining a balance between fossil fuels and nuclear energy, on the one hand, and renewable sources such as hydropower, solar, wind, geothermal and biomass, on the other. Being one of the largest energy markets in Europe and the largest consumer, Ukraine plays an important role in this debate.

If the renewable energy sector (RES) in the country continues to grow, it will strengthen energy security, market integration and decarbonization. International institutions, including the European Bank for Reconstruction and Development, have already demonstrated their confidence in the progress of the Ukrainian renewable energy sector.

The current state of the industry

Despite the fact that Ukraine is a newcomer to the renewable energy market, the growth rate in this sector is impressive. A recent review by the National Commission for State Regulation of Energy and Utilities showed that only during the second quarter of 2019 Ukraine launched wind power plants (wind farms) with a total capacity of 71 MW, solar (wind power plants) – 568.3 MW and biogas installations – 16 MW.

For comparison: in 2017, according to the State Agency for Energy Efficiency and Energy Saving of Ukraine, 87 new renewable energy facilities with a total capacity of 257 MW were commissioned, of which:

In 2017, the total amount of energy produced by RES, according to the State Agency, amounted to 2096 GWh. Information on the share of each energy source in the total structure of the volume of electricity produced by renewable energy objects can be seen on Fig. 1. 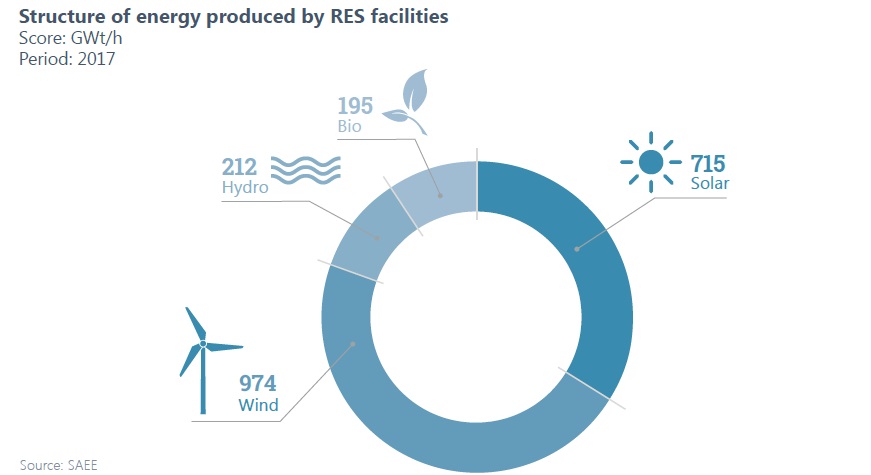 What kind of renewable energy source prevails in a particular region can be seen on Fig. 2. 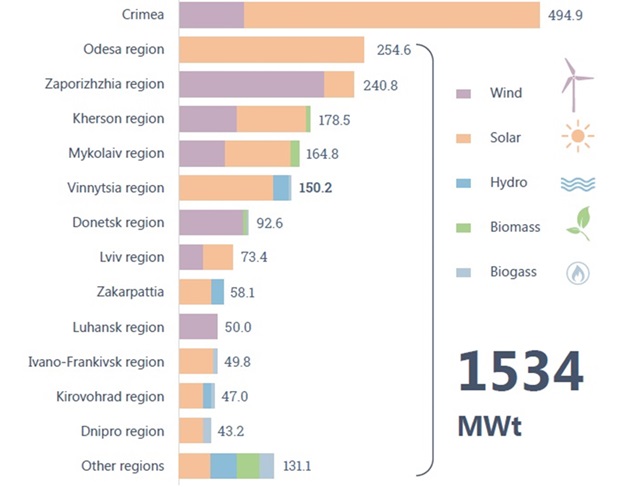 Over the last four years, about 1.5 billion euros have been invested in new renewable energy projects in Ukraine. Among all investment projects in the field of renewable energy, there is a unique opportunity to build a 1.2 GW solar power station in the Chernobyl exclusion zone (Fig. 3).

After the disaster at the station in 1986, the vast territory near the reactor became uninhabitable for hundreds of years. However, in 2016, French engineers were able to localize the radiation source by sliding an insulated arched structure onto the reactor building. There are a number of advantages to building an SES at this location: 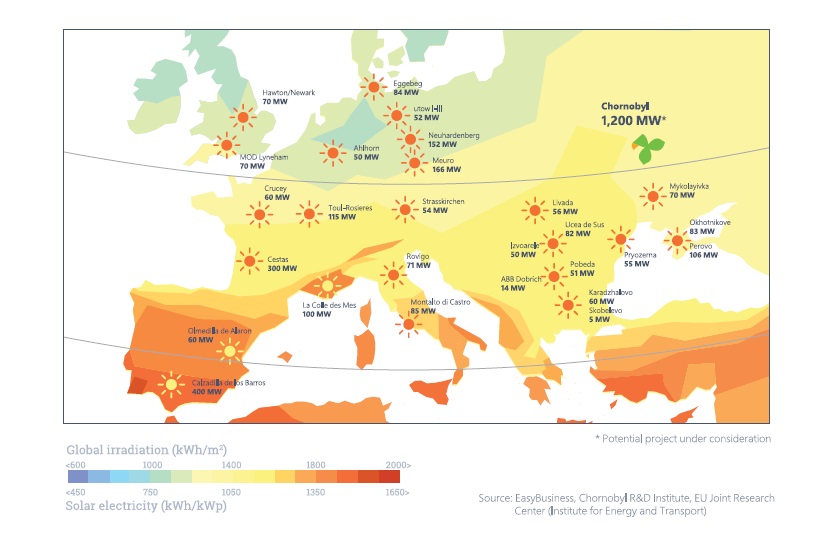 After the adoption of the Law of Ukraine “On the Electricity Market” in 2017, the renewable energy sector is developing rapidly. To stimulate the use of renewable energy, the government has introduced “green” tariffs that are compatible with EU preferential tariffs:

Below is a comparative table of tariffs in Ukraine and other European countries (Fig. 4). 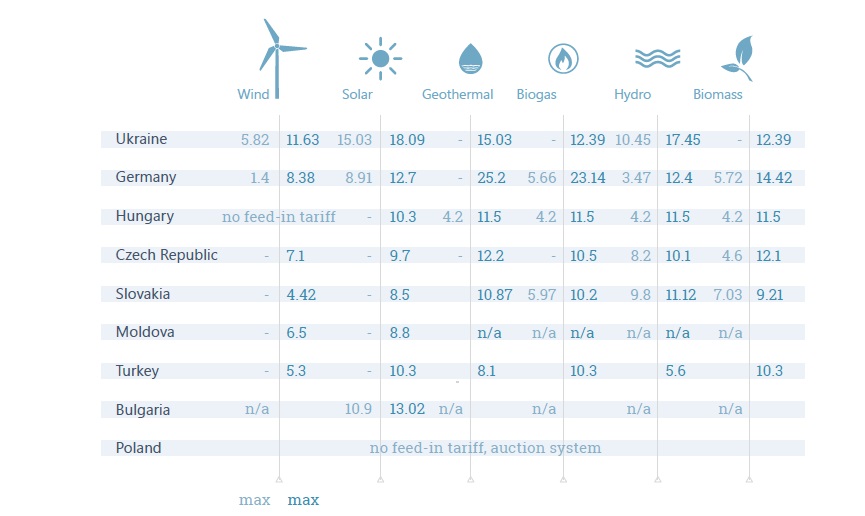 Fig. 4. Comparison of tariffs in Ukraine and other European countries. Source: State Agency on Energy Efficiency and Energy Saving of Ukraine; RES Legal Europe. Now Ukraine is moving from the so-called green, or preferential, tariff, one of the most profitable in the world for energy companies, to a new system of quotas based on auctions, which will come into force in 2020.

According to IRENA, the number of countries that have introduced a renewable energy auction system has grown to 67 in 2017 from 6 in 2005, and this number is still growing.

The auction is designed to prevent a monopoly on the Ukrainian renewable energy market. This is a transparent competition held through the ProZorro electronic trading system twice a year, in autumn and spring. According to him, participation in tenders will be mandatory from 2020 for solar energy projects with a capacity of more than 1 MW and wind power plants with a capacity of more than 5 MW. According to the terms of the competition, the one who offers the lowest price will be able to sell “clean” electricity to the state. By the end of this year, the first pilot auction is due to take place. The company that won the tender at the auction signs a contract and guarantees government support for 20 years.

The law provides that those who sign contracts in 2019 will be able to actually complete the construction of their blocks and facilities, providing current tariffs for solar projects for two years and for wind projects – for three.

The potential of renewable energy in the country

Ukraine is the largest country in Europe, there are more than 290 sunny days a year. The country is also uniquely fertile: agricultural land occupies 70% of the territory, that is, the bioenergy potential is obvious.

Ukraine can move to a 91% share of renewable energy by 2050, according to the report of the National Academy of Sciences and the Heinrich Belle Foundation “Transition of Ukraine to Renewable Energy by 2050”. The transition is expected to be both economically and technologically feasible.

According to the report, a complete transition is possible with:

The main sources of energy will be wind, sun and biomass. It is estimated that energy production from the wind will be 45%, the sun – 36%, and biomass and waste – up to 73%.

In accordance with the calculations of the Ukrainian Wind Energy Association, the potential of the Ukrainian wind farm is 16 GW. The report of the National Academy of Sciences and the Heinrich Belle Foundation simulated two transition scenarios – liberal and revolutionary. According to the optimistic scenario, the potential of the wind farm in 2030 will be 25 GW, and in 2050 – 60 GW (Table 1).

Tab. 1. Evaluation of promising technical characteristics of ground wind farms. Source: Transition of Ukraine to the renewable energy by 2050 (results of modeling of the reference and alternative scenarios for the development of energy sector), State Organization “Institute for Economics and Forecasting” of the National Academy of Sciences of Ukraine with the support of the Heinrich Boell Foundation Regional Office in Ukraine, Oct'17.

According to the State Energy Efficiency of Ukraine, theoretically, the potential of the sun in our country is 730 billion kWh per year, but technically possible – 34.2 kWh per year. It is predicted that 40–50% of private households will use solar panels on their roofs until 2050. This, in turn, will increase the demand for the use of solar collectors for heating water. Thus, private households will be provided with hot water by 70-100% in the summer and 15% in the winter. Again, the report of the National Academy of Sciences and the Heinrich Belle Foundation modeled liberal and revolutionary approaches to the transition to solar energy (Table 2).

Tab. 2. The potential of solar energy, GW. Source: Transition of Ukraine to the renewable energy by 2050 (results of modeling of the reference and alternative scenarios for the development of energy sector), State Organization “Institute for Economics and Forecasting” of the National Academy of Sciences of Ukraine with the support of the Heinrich Boell Foundation Regional Office in Ukraine, Oct'17. 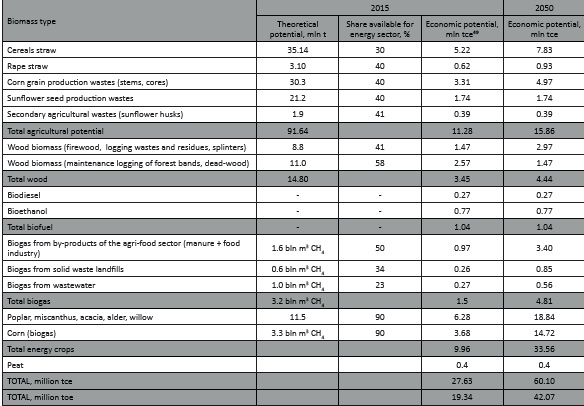 Tab. 3. Bioenergy potential of Ukraine. Source: Transition of Ukraine to the renewable energy by 2050 (results of modeling of the reference and alternative scenarios for the development of energy sector), State Organization “Institute for Economics and Forecasting” of the National Academy of Sciences of Ukraine with the support of the Heinrich Boell Foundation Regional Office in Ukraine, Oct'17. 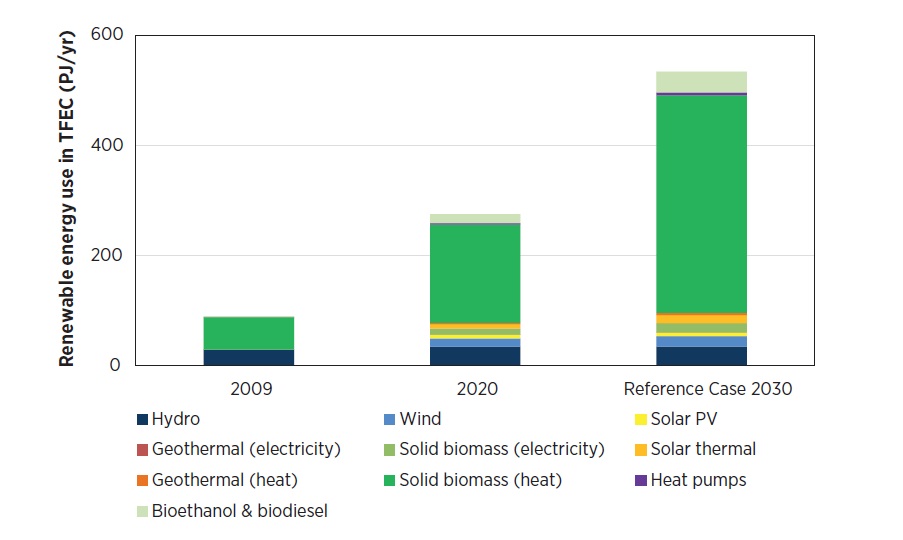 Fig. 5. Forecast of the use of renewable energy sources, 2009-2030. Source: IRENA together with Federal Ministry for the Environment, Nature Conservation, Building and Nuclear Safety of the Federal Republic of German, Remap 2030 Renewable energy prospects for Ukraine, 2015.

It is noteworthy that some Ukrainian cities have already publicly announced the full transition to renewable energy by 2050. Zhytomyr is the first city in Eastern Europe where a full transition to alternative forms of energy is planned. The city Mayor announced this in 2018. The city authorities and the international non-governmental environmental organization 350.org are collaborating on this project. The same memoranda of cooperation with 350.org were signed by Kamenetz-Podolsky and Chertkov.

Well, in the case of the introduction of a target policy for the development of renewable energy (and this is the main condition for the revolutionary scenario of the “energy transition” of Ukraine), it is quite realistic to increase the share of alternative energy in the country to 91% by 2050. At the same time, it is necessary to reduce the need for energy resources by 42% compared to the conservative scenario.

The simulation results of the revolutionary scenario indicate that Ukraine has sufficient renewable energy potential, which can provide full coverage of possible demand for energy resources and services, even if a high proportion of energy-intensive industry is maintained.