On April 24, an exciting webinar “The impact of current challenges to the European and Ukrainian solar markets” took place, organized by the Solar Energy Association of Ukraine (ASEU) with the support of SolarPower Europe. The online meeting was held in the format of industry experts’ presentations, followed by a lively discussion of pressing issues.

Speakers mentioned that, in the COVID19 pandemic context, there is a certain economic downturn, the duration of which depends on the length of quarantine and its consequences. In 2020, it is expected to temporarily suspend a significant number of new projects for the construction of solar power plants both in Ukraine and in Europe. European countries are already preparing a series of restoration and support measures for business. 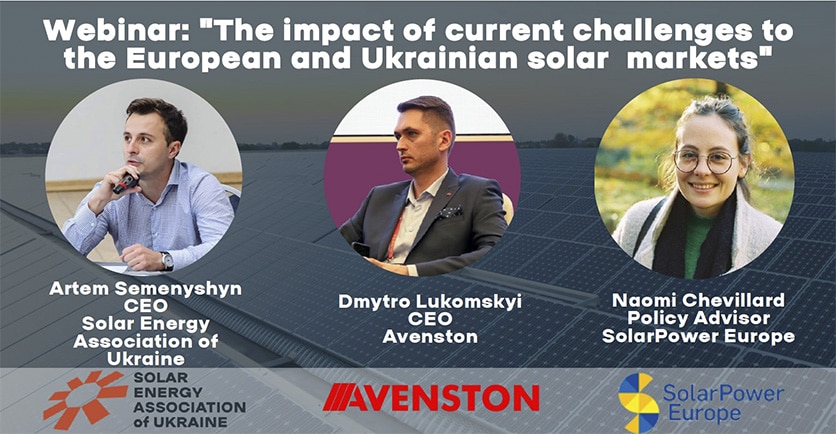 The development of the solar energy market in the new reality

Dmytro Lukomskyi noted that such a rapid growth rate of solar installations in Ukraine as took place in 2018-2019 no longer be.

«Of course, this year is very difficult not only for our industry but also for the entire economy of the country. Even before the pandemic due to significant changes in legislation, I expected the total capacity of installations in 2020 to be 3-5 times less than in the previous two years. However, under COVID19, the number of installations will be smaller. Some of the projects our company continues to implement, but, with many investors, we are talking about moving the complete implementation to the end of 2020 or the beginning of 2021. Unfortunately, in 2020 there will be some gap» Dmytro Lukomskyi, CEO AVENSTON.

Also, the state has not taken steps to prevent the negative consequences of COVID19 in the energy sector.

Policy Advisor of the SolarPower Europe Naomi Chevillard outlined the short-term and long-term effects of COVID19 on solar energy:

«In the short term, we see a decrease in demand for new projects, lower prices for PV modules, cancellation of planned deliveries, and financial constraints. As for the long-term results, we expect a delay in new installations in 2020. The duration of this delay depends on how long the quarantine lasts and how it affects the business. We also believe that most of the capacities will not be canceled, but rather transferred to 2021 and 2022. The industry will return to normal, depending on the restoration of the general situation»Naomi Chevillard, Policy Advisor of the SolarPower Europe.

What are the European governments doing?

Naomi told what measures are taken by European countries to support the renewable energy sector. This is additional financing, an extension of pre-PPA terms, adjustment and postponement of tenders, freezing of planned reductions in preferential tariffs, crisis management through direct support schemes SURE and PEPP. Also, the European Commission is preparing the so-called “EU recovery package”, the main purpose of which is to facilitate countries out of the crisis and prevent a deep global recession.

«We must understand that quarantine entails a general economic downturn. So, for example, since the beginning of 2020, we launched several new projects, some of which were delayed or completely stopped due to a new pandemic reality. Besides, a drop in electricity demand led to the shutdown of several solar power plants on the recommendation of the power system dispatcher.

Now my company has several projects underway. Fortunately, basic decisions, such as the purchase of solar modules and inverters, were made earlier, so the schedules have not changed.

After quarantine is completed, I plan to make some important changes to the company’s strategy, including several new business lines opening. I suggest a heightened interest in projects for self-consumption. Not only for rooftop but also ground-mounted PV-stations. Currently, the expected payback period is less than 7 years.

The Renewable Energy Market will grow and go stronger. This is our future. When making certain decisions, one must always take this into account. I believe that after the crisis we will see a rapid increase in installations both in Ukraine and in the world. Let’s help each other and develop together!»Dmytro Lukomskyi, CEO AVENSTON.

Digitalization in the energetics – opportunities and technologies

Why is there so much hope for the use of digital technologies in the energetics? Is this not a new “favorite doll” we are offered to play with by huge IT corporations having almost unlimited global financial capabilities and influence? Why is the RES energy trend associated with the trend of the virtual technologies that cannot be “touched”?
Discover more

Solar power plants can be build in any regions of Ukraine

Dmytro Lukomskiy explains why business has showed an interest in solar energy only now and what the investor intending to invest in solar projects needs to know.
Discover more

We already know a lot about renewable energy sources, but in recent years the topic of hydrogen has been raised more and more often. What is the role of the light chemical element of the Mendeleev periodic table in the renewable energy generation system? How do hydrogen production processes take place, and what are the global practices for its use?
Discover more