The main world markets for investment

According to REN21 estimates, 74% of global investment was received by three world leaders in electricity production with renewable energy sources – China, Europe and the United States in 2017. In particular, 45% of global investment is related to China, which is 10% more than in 2016. In second place – Europe (15%): The European Investment Bank has allocated 4.3 billion EUR in 2017 to initiatives in the energy sector. Third and fourth places were shared by the USA (14%) and Asia-Oceania, excluding China and India (11%). Smaller shares in North and South America, with the exception of Brazil and the United States (5%); India (4%), the Middle East and Africa (4%) and Brazil (2%). 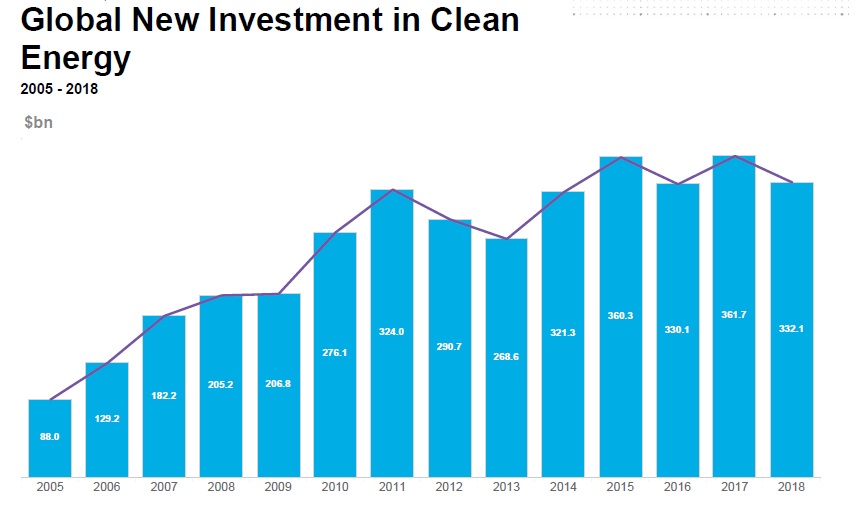 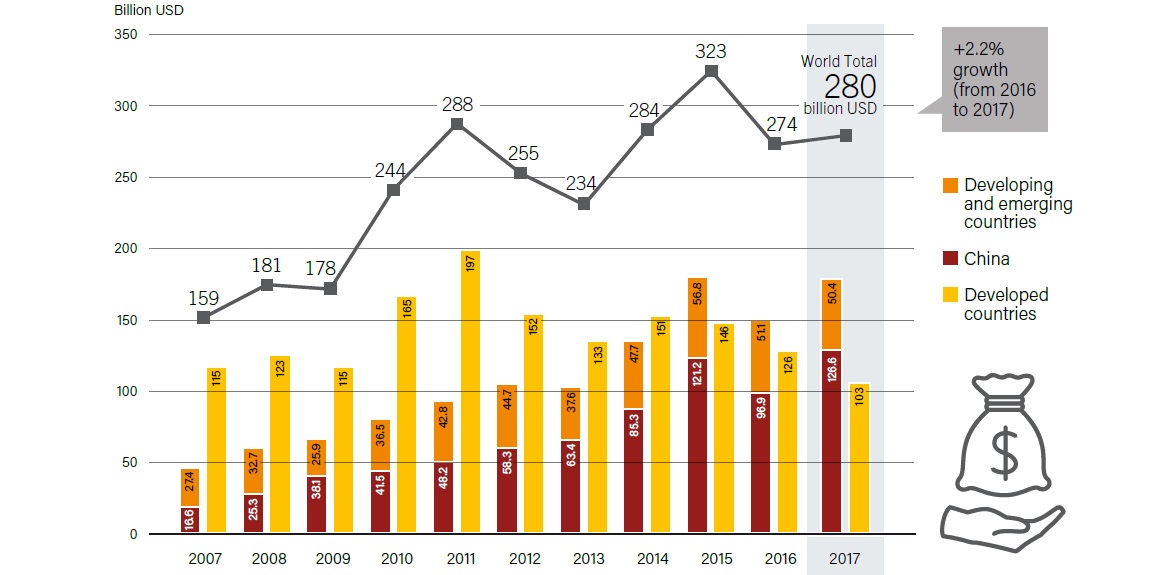 Investments in new renewable energy sources (taking into account the entire hydropower industry) are three times higher than the inflow of foreign investments in fossil fuel production capacity and twice in the fossil fuel and nuclear power taken together. In 2017, the leaders of investors were solar photovoltaic and wind power plants, accounting for 57% and 38%, respectively. Solar energy is the only technology, the volume of investment in which in 2017 increased by 18% compared with 2016 (Fig. 3). 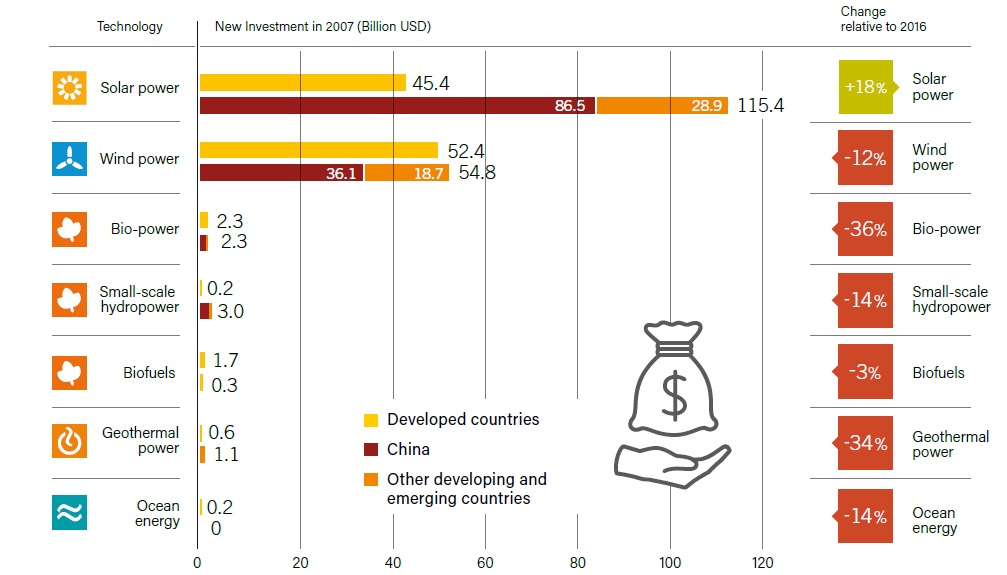 Distribution of investments between countries and regions

In 2015, progressing and countries that are in transition economic development, first outstripped developed countries by investing in renewable energy sources, and in 2017, they expanded the leadership, accounting for a record 63%, mainly at the expense of China. Changes in the size of investment in renewable energy sources were varied according to the region, increasing in China, Latin America (including Brazil), the Middle East and Africa, but declining in Europe, the United States, Asia and Oceania (excluding China), Japan and India ( Fig. 4, 5 and 6).

China’s renewable energy and fuel investments have reached a record 126.6 billion US dollars in 2017, up to 31% from 2016. A great amount of all solar energy in China accounts for more than 1 MW of solar power installations for general use, while the country’s investments in the development of small solar photovoltaic projects have increased by almost five times. For comparison, China’s total investment in wind energy amounted to 36.1 billion dollars. USA; investments in terrestrial wind power decreased by 28%, while the offshore wind power increased by 180% to $ 10.8 billion. China has also invested greatly in large hydroelectric power plants by commissioning 7.3 GW in 2017, many of which were projects with a capacity of over 50 MW. 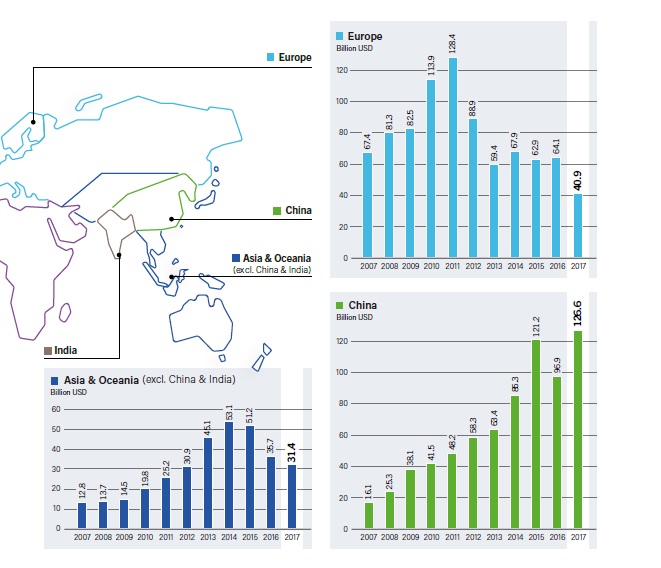 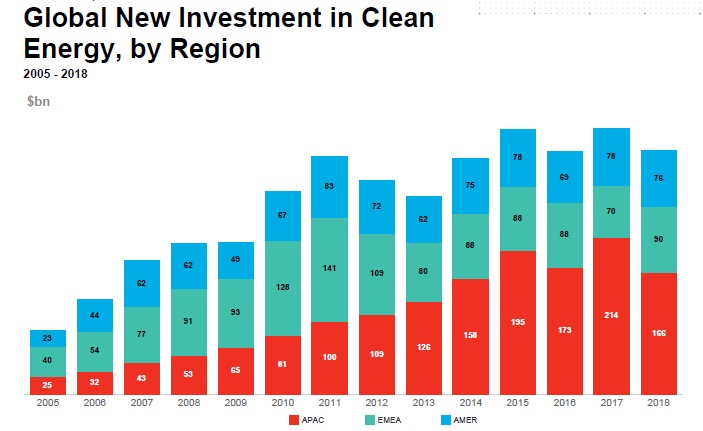 The United States continued to be the largest individual investor among the developed countries: in 2017, their total amount was $ 40.5 billion, in 6% less compared to 2016. Financing of communal sector assets remained stable, amounting to 29.3 billion US dollars, while the share of wind power was 67%. Although the small distributed power (on the roof and other solar energy systems up to 1 MW) also attracted considerable funds, the total amount of 8.9 billion US dollars has fallen by 12% compared with 2016.

In Asia and Oceania (excepting China and India), the inflow of foreign investment reduce by 12% to $ 31.4 billion. This is the lowest indicator since 2013, mainly due to the decline of Japan’s economy, the key net capital exporter in the world. Japan’s investments continued to decline during 2017, falling from 28% in 2016 to $ 13.4 billion. Other markets in the downturn region include Thailand (a decline of 72% to $ 700 million) and the Philippines (a decline of 77% to $ 300 million). However, some countries noted a marked increase in investment, including Indonesia (an increase of 67% to USD 1.0 billion) and Pakistan (an increase of 42% to USD 700 million).

In North and South America (outside of Brazil and the USA), investments made in total $ 13.4 billion (an increase of 124%). Investments in Mexico and Argentina jumped by about nine, to 6% and $ 1.8 billion, respectively. In other countries of the region there was a slight increase.

Total investment in Brazil was $ 6 billion. The USA, having grown by 8% compared with 2016, is much lower than the peak amount of 11.5 billion US dollars in 2008. A significant portion of Brazil’s 2017 investment was directed at wind power.

Investments in the Middle East and Africa have increased in total to 11% in 2017 to $ 10.1 billion, with a substantial increase in Egypt and the United Arab Emirates. Investments have grown six times in Egypt, to $ 2.6 billion, and 29 times in the UAE, to $ 2.2 billion. In Jordan, investments increased by 26% to a record $ 1.1 billion.

Distribution of investments by the type

The potential for investment in renewable energy sources in Ukraine

The International Renewable Energy Agency (IRENA) introduced the REmap 2030 program in 2015. It is a series of road maps for the future of the renewable energy sources, indicating the real potential for individual countries, including Ukraine. The program contains information on how to expand the use of renewable energy sources and thereby help to double the share of these technologies in the world energy balance by 2030. IRENA specialists and experts from different countries worked together on REmap 2030. 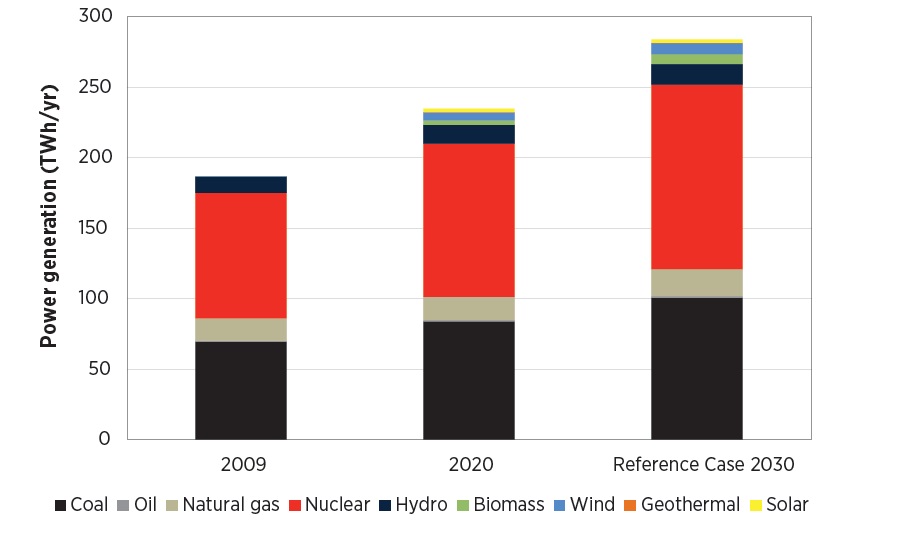 Fig. 8. Electricity production in accordance with current policy, 2009-2030. Source: IRENA together with Federal Ministry for the Environment, Nature Conservation, Building and Nuclear Safety of the Federal Republic of Germany, Remap 2030 Renewable energy prospects for Ukraine, 2015. 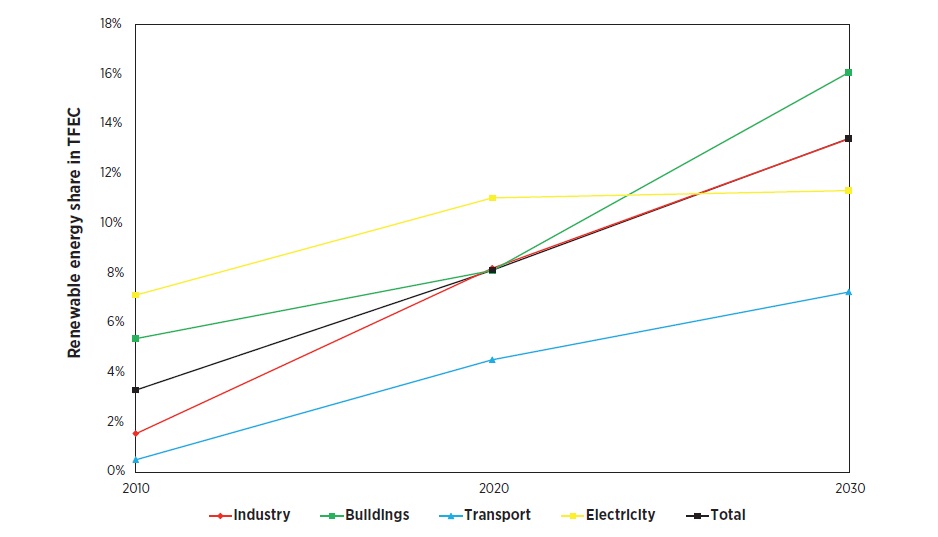 Fig. 9. Predicted development of the renewable energy share in current policy, 2010-2030. Source: IRENA together with Federal Ministry for the Environment, Nature Conservation, Building and Nuclear Safety of the Federal Republic of Germany, Remap 2030 Renewable energy prospects for Ukraine, 2015. 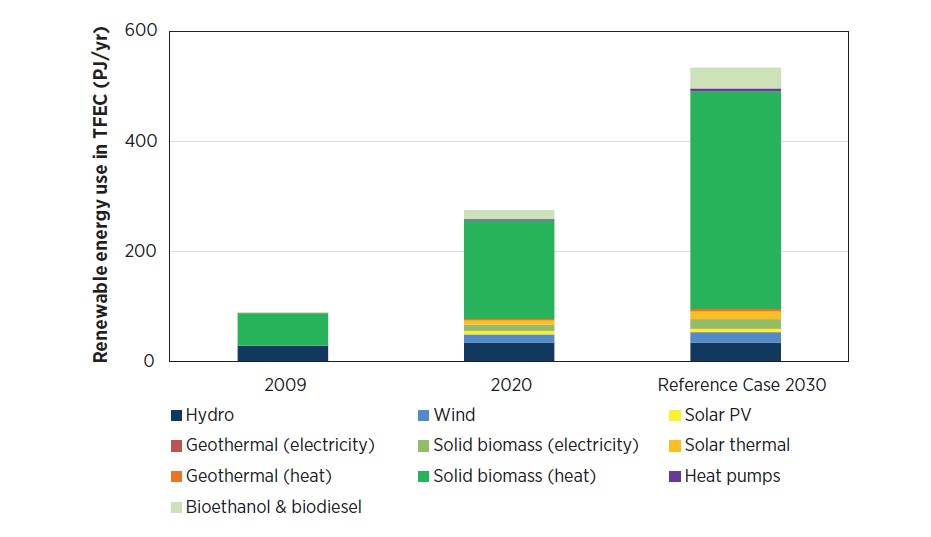 Fig. 10. Source: IRENA together with Federal Ministry for the Environment, Nature Conservation, Building and Nuclear Safety of the Federal Republic of German, Remap 2030 Renewable energy prospects for Ukraine, 2015.