Some features of designing BIPV-systems

The development of BIPV system projects is a very complicated and laborious process, as it is necessary to find the compromise between optimal conditions of PV module operation, the requirements of building standards, architectural component and profitability in the result. Besides, typical solutions and the software used for the calculations and engineering of typical solar power plants cannot be applied to this case with maximum efficiency. It is very important here to make a correct choice of the way of BIPV element installation and adapt the design of BIPV elements to the general architecture of the building for getting the systems optimised from the point of view of architecture and power supply. The development of BIPV system projects is the work at the junction of some professions at once: architect, builder and electro-technical engineer. Some main features of BIPV system project development are described below. 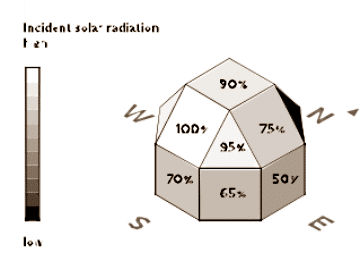 Fig. 1. The efficiency of solar radiation reception by tilted surfaces relating to the orientation of the module to the sides of the world.

The observance of these conditions allows receiving maximum yearly volume of solar radiation. If some small angular errors (from 20 to 40 degrees) and inconsiderable deviations from due south to west/east occur, insignificant loss of received solar radiation is noticed. However, it is almost impossible to ensure the optimal position of modules in the case of integrating solar panels with the building, as the parameters of architecture are basic ones. Besides, one can obtain enough considerable volumes of the generated power under suboptimal position of solar modules, but if their performance characteristics make possible the increase of power generation. These are the modules functioning well in the case of weak, sky radiation or relayed beam: they can be installed in the places, where their orientation is not favourable. First of all, these are thin-film solar panels which function more effectively under the conditions of sky radiation or relayed beam, than monocrystalline solar energy systems, demonstrating the highest performance under the conditions of direct solar radiation.

The correct choice of solar modules, based on the particularities of their operation, can compensate for the position of solar batteries referring to the sides of the world and horizon line (far from ideal) not in full, but to a significant extent. This fact proves a high energy potential of the frontage of the house. For example, in Germany total area of frontages comprises about 3 thousand square kilometers that make possible to place on the frontages BIPV modules with total power about 300 GW. In the conditions of the modern city, the area of frontages, especially of high-rise blocks, is larger than the area of roofs. If to take into account only the frontages oriented to due south (optimal direction for placing solar modules), in Germany their area is 80% larger than the area of horizontal surfaces within the city, where one can install the roof solar power plants. The placement of BIPV modules on frontages has one more advantage: they are situated in this case close to the consumers and it decreases significantly the losses related to the power supplies from the place of generation to the consumer.

From the temperature conditions to PV heating power plants

One of PV module particularities is their dependence on the temperature conditions. When the solar panel is heated, the considerable reduction of the volumes of the generated power takes place. The rates of losses depend on the type of applied solar panels. This rate is higher for monocrystalline solar panels, when thin-film solar panels are less dependent on the temperature conditions. It is necessary to consider this effect during the calculations, because standard measurements of solar panel capacity and performance is realised at a temperature of 25°C. The solar modules can be heated to 50-65°C on a summer day under direct sunlight. Standard ground solar power plants include the system of ventilation of the solar panel rear part. The situation of BIPV systems is more complicated, as they compose a whole with the building structure. That is why, as an option, one can apply to solar modules the way of forced cooling, having connected them to the common system of a thermal control of the building. Surely, in this case you need to use the ratio “expenses for forced cooling/losses of the generated power because of solar module heating”.

The possibility to use BIPV elements as the components of active heat recovery systems is examined thoroughly at present. In fact, it results in the move to the next level and the creation of photovoltaic thermal systems, BIPVT-systems. Such a system can be closed-loop one (liquid-loop heater, the water is used as a heat transfer liquid) or open-loop one (heating of rooms is based on the ventilation system and realised by means of fan air).

Shadowing of solar modules can have a strong impact on BIPV system performance. It can results from several reasons:

Besides, the area of shadowing tends to change. E. g., the trees can grow higher; other buildings can be erected nearby; the layer of dust can thicken. It is possible to minimise shadowing effect by means of careful planning and project development to ensure maximum incident solar radiation. First of all, one needs to calculate the size and position of shadow during a day and a year to optimise the disposition of solar modules, their orientation and position within the structure of the building. If the shadowing effect is not fully removed, one can reduce it to the minimum by means of the selection of solar module proper technology, design and electric connection of solar panels. For example, if to use parallel connection and one or some modules are shadowed, the rest system will function. One important thing proper to BIPV systems: in contrast with traditional systems, the surfaces of buildings do not allow placing long, continuing string of solar panels connected in series. That is why it is necessary to use micro-inverters, which are placed within each string (array of panels), for ensuring the alignment of connection.

It is worth to stress the problem of dustiness, which is very important, taking into consideration the quantity of dust. It is necessary to condition cleaning of solar panel surfaces, if the volume of precipitations is not sufficient.

Incident direct solar radiation provides much energy. This direct solar radiation suits the best to monocrystalline silicon solar panels, which transform it into electricity. Nevertheless, a significant amount of direct solar radiation is scattered by vapours and particles of dust (smuts) which are in the atmosphere. Besides, a part of solar energy, being on the surface of the ground, is reflected. In this way the scattered (indirect) radiation occurs. The capacity of solar panels to transform the scattered radiation is named the performance with low degree of light. Thin-film solar panels shows more efficiency than crystalline modules under the conditions of low degree of light. They function effectively in cloudy weather or when they are placed on the northern side of the building.

Spectral selectivity is an important aspect, which is necessary to be considered. Sunlight comprises the emissions of different diapason: from ultraviolet (high frequency waves) to infrared radiation (low frequency waves). Crystalline PV solar modules absorb mainly low-frequency radiation, when Thin-film solar panels function in larger diapason, that is why they operate with more certainty in cloudy weather.

In the case of BIPV systems, which are an integral part of the house, the situation, when the peak of the output power, generated by the photovoltaic system does not coincide with the consumption peak period. In the case of public services and commercial offices, the periods of the power generation and the power consumption peaks take place practically at the same time. Nevertheless, the power deficit can occur at morning time, when BIPV systems do not operate with maximum load. To avoid it, one can condition the presence of hybrid power plant, when the lack of power is covered from common grid.

The time lag between the peak periods is more obvious in a private house, where the power consumption peaks occur during morning and evening hours (in most of the cases). In this case, one should condition the installation of the energy storage system, which will charge (accumulate power) in daylight, during the period of maximum solar activity, and release the accumulated power in the evening.

It is necessary to take into consideration the installation of BIPV systems during the building project development, because the dimensions of the elements of BIPV systems do not always meet the requirements of the construction industry. Manufacturing lines producing solar panels are adapted for the production of the items of certain dimensions. That is why the architects should develop the projects of the buildings basing on the actual dimensions of the modules. Indeed, the line changeover and the production of customised solar modules of different dimensions and forms will increase their price.

Moreover, the solar photovoltaic module is a final product and it is impossible to modify its dimensions on the construction site, as for example, break off a piece of brick or cut off a ribbon of asphalt roof felt. Solar module shall be installed as it is provided to the construction site without changing the dimensions and the form. It should be considered obligatory.