The overview outlines the existing rules, requirements and incentives available for developing green energy projects in Ukraine as well as those which have recently become effective and soon to become effective and of which an investor should be aware when planning a business strategy in this high-growth sector.

To stimulate the operation and development of renewable energy sources in Ukraine, a «green» tariff, or special feed-in tariff as this may be known in other jurisdictions, was introduced in 2009. The feed-in tariff for green projects in Ukraine is one of the highest in the world, which makes investment into this sector very attractive.

On 1 January 2017, the capacity of units generating electricity from renewable energy sources (the RES) in Ukraine and applying the green tariff was 1,118 MW.

The following types of RES are eligible for the green tariff:

Below is a map showing the geography of the commissioned and the potential RES projects in Ukraine by types of the RES.

Taking into account the time frames established for the public discussion of the green tariff issues at the local level (up to 14 calendar days) and then for the public discussion at the NEURC’s level (up to 5 business days) as well as the time required by NEURC to consider and approve the submitted documents, it may take up to one month for the RES Producer to obtain the green tariff (NEURC Resolution No. 866 dated 30 June 2017).

Table: Green tariff rates by types of the RES and date of commissioning of the RES 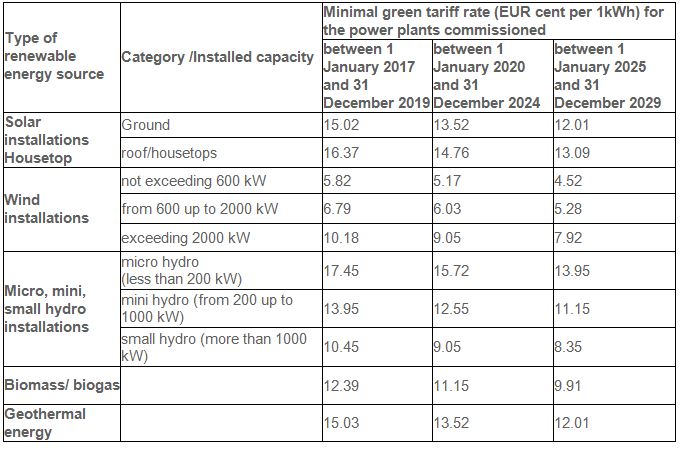 To benefit from the green tariff, the RES Producers are no longer required to use a certain amount of raw materials, equipment, works and services of Ukrainian origin. The use of equipment of Ukrainian origin by RES Producers, however, is stimulated by the premium added to the green tariff, provided the respective RES units are commissioned between 1 July 2015 and 31 December 2024.

The list of equipment for each type of RES that qualifies for the green tariff premium and its specific percentages are prescribed by law, i.e., for blades and towers such indicator is established at the rate of 30%; and at 20% for gondolas and main frames (Law of Ukraine No. 555-IV dated 20 February 2003 «On Alternative Energy Sources»).

Thus, by using blades of Ukrainian origin the RES Producer can expect a premium added to the green tariff of 5%, as the specific percentage for blades is 30%. To calculate the level of use of equipment of Ukrainian origin, the RES Producer should apply to the NEURC requesting it to confirm the calculated amount of the equipment of Ukrainian origin with the required amount for the relevant RES object. The NEURC considers the application within 30 calendar days from the date of submission of the required documents and takes a decision on adding a premium to the green tariff established for such RES Producer (NEURC Resolution No. 2932 dated 10 December 2015).

The state provides RES Producers with certain guarantees if they do not manage to sell the electricity produced from the RES directly to customers or to the electricity supply companies:

The regulated electricity suppliers (oblenergos) will be obliged to buy at the green tariff the electricity produced by the PHs in the volume exceeding the monthly consumption of electricity by the PHs itself.

Below is the list of the steps that investors would need to take in order to undertake the green energy project in Ukraine and the key terms and conditions of the PPA of which the investor should be aware when negotiating the PPA:

Below is the summary of recently adopted changes to the PPA:

New Rules of the Game

To stimulate the on-going reforms of the electricity market, in April 2017 Verkhovna Rada of Ukraine adopted the Law of Ukraine «On the Electricity Market» (the “Law”). The Law became effective in June 2017, however the new electricity market segments will become fully operational in Ukraine no earlier than 1 July 2019.

The Law imposes specific obligations on the guaranteed purchaser, universal suppliers and system operator aimed at increasing the share of renewables in the electricity market. Such obligations are effective until 1 January 2030 and relate to purchasing and dispatching of electricity generated from the RES units on a priority basis.

The Law envisages that the RES Producers are entitled to sell the electricity generated from the RES under the bilateral agreements either on the day ahead market, on the intra-day market or at the balancing market at the prices set on the respective market segments or at the green tariff.

The RES Producers can sign the PPA with the guaranteed purchaser even before the RES unit has been commissioned at the presence of land title documents for the RES project, a construction permit (or an equivalent document) and a signed grid connection agreement with the system operator. If the RES unit is not commissioned within three years after obtaining a respective construction permit, the agreement with the guaranteed purchaser would be deemed terminated.

The guaranteed purchaser is entitled to compensation for the difference between the price paid to the RES Producers and the price of electricity resold on the day-ahead and intraday markets as payment for its services for the increase of the share of electricity generated from the RES. The amount of such compensation is to be approved by the NEURC. The compensation to the guaranteed purchaser shall be made by the nuclear power plants until 1 July 2020 and, afterwards, by transmission system operator (currently the National JSC «Ukrenergo») until 1 January 2030.

The part of compensation to the guaranteed purchaser covered by the RES Producers who participate in a specially created green tariff balancing group will be increasing by 10% annually reaching 100% in 2030.

Up to 31 December 2029 the industrial plants generating wind, solar and hydro electricity that are members of the specially created green tariff balancing group must compensate to the guaranteed purchaser only in case if the hourly imbalances of the RES Producer (the difference between the actual and scheduled production) exceed 20% for wind energy units, 10% for solar energy units and 5% for hydro energy units.

RES Producers commissioned prior to 11 June 2017 (the date when the Law came into the effect) are released from paying any imbalances compensation to the guaranteed purchaser up to 31 December 2029.

Starting from 31 December of the year when the output of electricity generated by all RES Producers has reached 5% or more percentage in the annual energy balance of Ukraine, then the RES Producers must compensate to the guaranteed purchaser if their hourly imbalances exceed 10% for wind energy units, 5% for solar energy units and 5% for hydroelectric energy.

The other rules for the application of the green tariff, including the guarantees applicable to RES producers, as mentioned herein, remain the same.

Importation of the following equipment to Ukraine is exempted from Ukrainian customs duties and VAT:

Temporarily until 1 January 2019 the following operations will not be subject to VAT:

The importation of electricity generated by RES facilities is not subject to excise tax.

With numerous green energy projects now launched and operating in Ukraine, there are many opportunities open for high-growth investment into the green energy sector of Ukraine with the green tariff and the other guarantees effective until 2030.

The current legal and regulatory framework provides investors with sufficient incentives and mechanisms to ensure successful implementation and development of a green energy project in Ukraine.

Technology and operating principles of heat generators for alternative fuels

Existing technologies of hard biopropellant incineration are briefly analyzed in this article. These technologies are used in thermal energy generation systems on renewable fuel types from domestic and foreign producers.
Discover more

New analytical data on the results of global renewables development in 2018 forced the scientists to change their previous forecasts. Electricity generation at PV stations will become a key contributor to overall electricity generation soon, but the main segment of the entire global power grid as well.
Discover more

Some researchers believe that geothermal energy will eventually be about 1/6 of the global energy supply, while others, on the contrary, give it a minimal chance of further existence... It is your choice whether to invest in building a geothermal power station.
Discover more