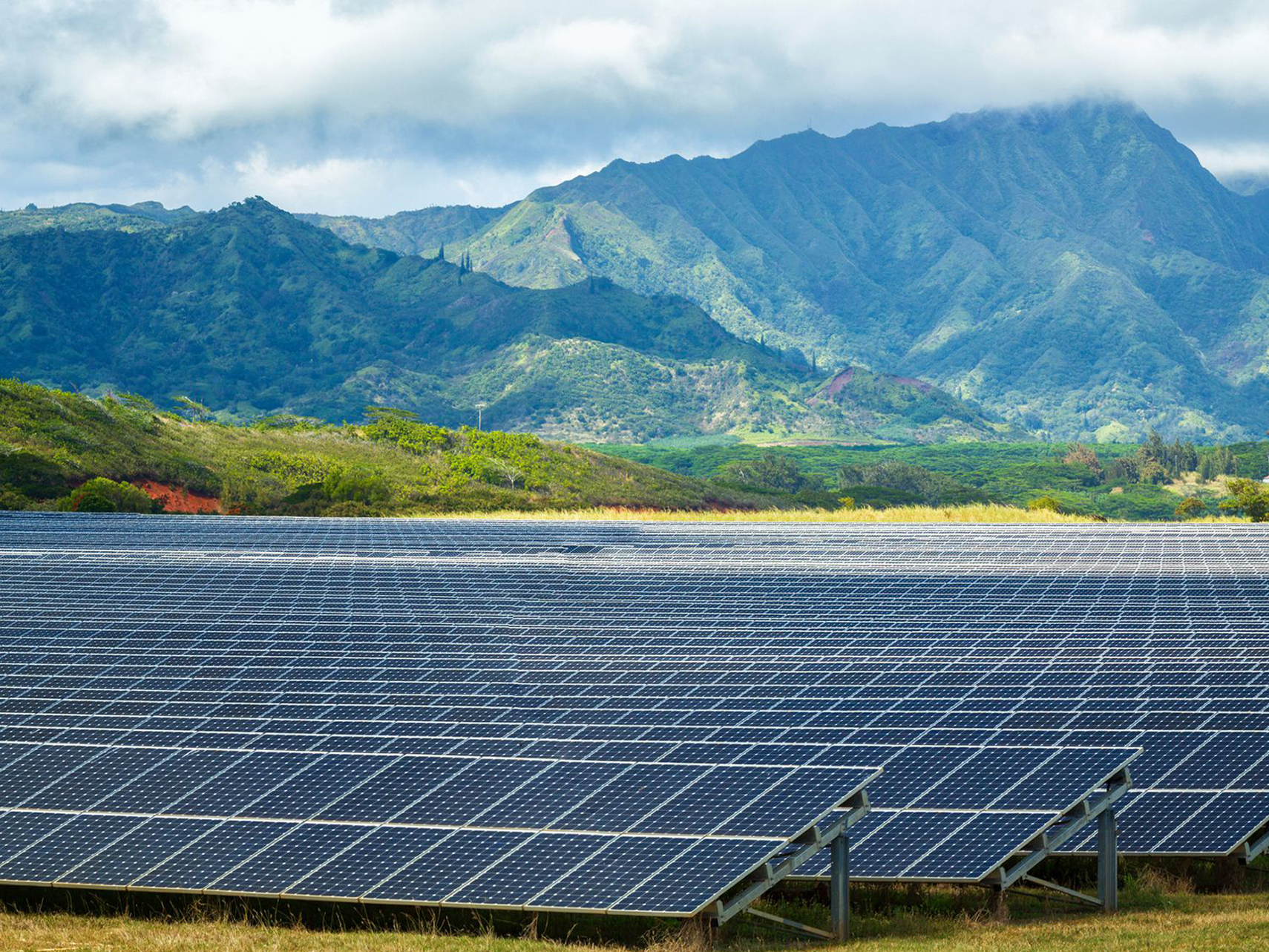 Recently, a large group of scientists and experts have published in the reputable journal “Science” a confession that their conclusions about the development of the PV industry, which were made earlier, were wrong. “Taking into account the pace of change in PV systems, or if we look at the dramatic reduction in ongoing costs, or to scale up energy production, despite the fact that the actual growth of PV generation suddenly jumped on by many of its researchers (including us). Two years ago, we were focused on efforts to reach global power from 3 to 10 TWh by 2030. Now we see that the global PV generation will definitely reach ~ 10 TWh by 2030, and by 2050 will occupy 30 ÷ 70 TWh, that is, PV technology will satisfy most of the world’s energy demand. … At present, the global installed PV-power exceeded 500 GW by the end of 2018, which means that according to the forecast models and declared projects, an additional 20 GW is planned to be installed in 2022-2023, that is, it leads all of us to the era PV-energy on a scale of scope “, – emphasize the researchers.

In global terms, the average world prices of PV modules have decreased by more than 100 times in 40 years. “Two years ago, we noted that prices for PV-modules can be reduced to the level of 0.50 $ / W and 0.25 $ / W with the corresponding aggregate deployment of capacities from 1 and up to 8 TWh”, was said in Science. But according to the results of 2018, when only 0.5TW of PV-power was installed, the average world price for module sales was already lower than $ 0.25 / W. Reducing the cost of the module caused a sharp drop in the price of energy from PV stations. By reducing the cost of PV installations, there are now many industries that can consume this energy at an existing price … A quick fall in the price of PV-electricity means that we are entering the era when it becomes competitive with traditional energy sources everywhere in the world. ”

Extending access to a huge source, which is PV-transformation, caused a cumulative effect of increasing demand for electricity. Many industries are already beginning to reorient and produce appropriate equipment, which opens up new horizons and changes forecasts. Looking at pic. 1 in Science, it becomes clear that all development scenarios should currently be revised compared to the World Energy Outlook 2018 (WEO) forecast, and the preconditions for increased demand for electricity (dashed curve). The gray area represents the zone for future growth of electricity consumption. The blue curves in the graph on the right hand side show the pace of the replacement of electricity from other sources in various industries.

Fig. 1. The emergence of prerequisites for the growth of electricity consumption, including PV. Source: Science, May 31, 2019: "Terawatt-scale photovoltaics: Transform global energy."

Forty five well-known scientists and industry leaders who have signed up with Science in the article say that PV should play a major role in deploying total electricity consumption. Current forecasts that PV power will increase by 2030 from the current level of 20 (!) times, that is, with the average annual growth of the PV industry by 30%, will become a critical factor for the electrification of the transport sector foremost. Heating electrification will contribute to the development of heat pump systems with an average annual efficiency of 3-4, which will also motivate the emergence of new systems for energy storage in the form of heat, which in some cases will be more advantageous than direct electrical storage. “The emergence of a large amount of available ” decarbonated ” electricity will lead to the continuous electrification of almost all energy sectors,” the article says – and it opens the way for the construction of a “low-carbon” global power grid at the lowest cost. ” But all the information will be given in order.

The global alliance of solar research institutes, which includes the American NREL, the German Fraunhofer Institute (FGFAF) and the Japanese National Institute of Leading Industrial Sciences and Technology (AIST), conducted a study according to which the cost of solar systems in all these countries has definitely diminished for years. At the same time, in these countries there were different preconditions for state support, the presence and change of “green tariffs”, attitudes towards traditional sources and the use of nuclear energy, pic. 2. The development of PV-systems (paradoxically – but the fact!) reduces the previous general misgivings about the negative impact of the unevenness of this energy source on the power systems sustainability. The distribution of PV installations in the utilities sector is very well superimposed on peak daily electricity consumption and on rising consumption from the operation of cooling and air conditioning systems in the summer. The deployment of network solutions, storage technologies, seasonal energy storage and additional technologies for converting solar energy in combination with methane and other chemicals such as hydrogen or ammonia, or for the manufacture of chemicals for industrial processes, or combined solutions – relatively look in general inexpensive strategies that will further develop renewables.

However, one of the main factors affecting the final price of PV systems is the very large impact of “soft” costs – the one as for permits, licenses, fees, etc. This component can reach 20-30% of the total cost, see Fig. 3, and it is a very powerful reserve for further reduction of the cost of PV-energy. 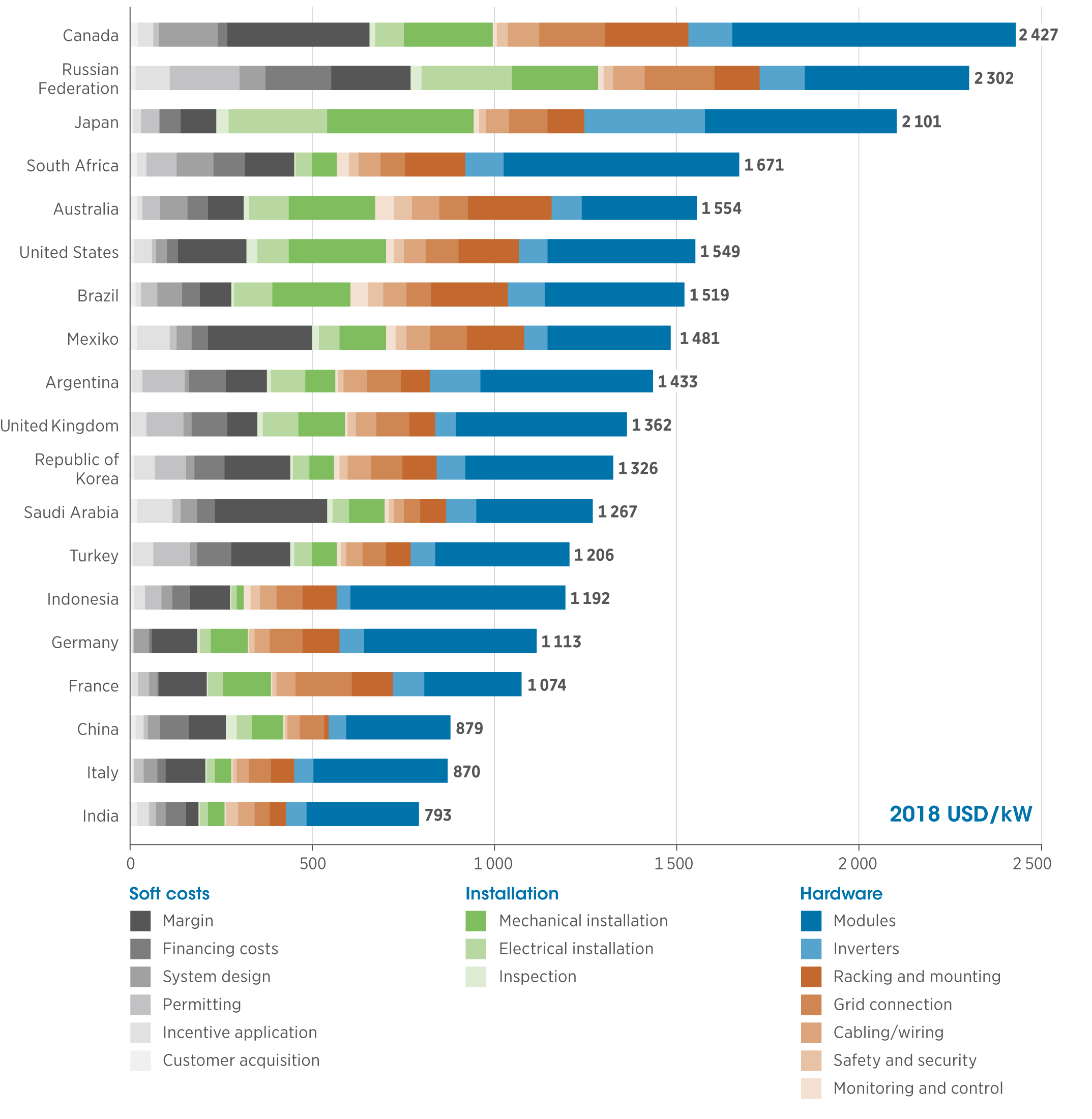 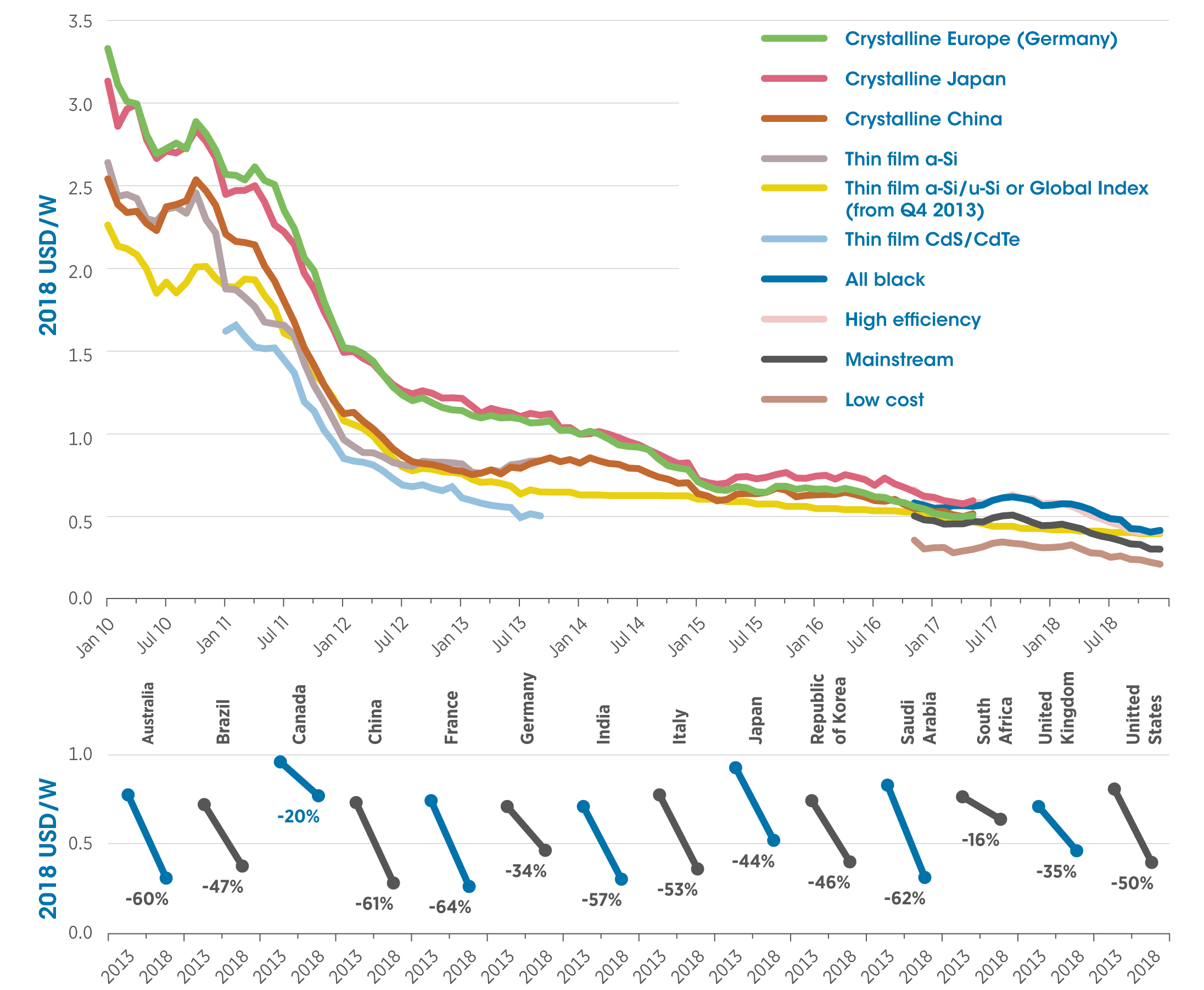 Fig. 4. Average monthly prices of European photovoltaic modules depending on module technology and origin, January 2010 - July 2018 (from above) and average annual market prices for modules in 2013 and 2018 in different countries (below). Source: IRENA - Renewable Power Generation Costs Report in 2018, May 2019.

It is these factors that became the basis for changing forecasts for the prospects of PV-technology among other types of renewables. 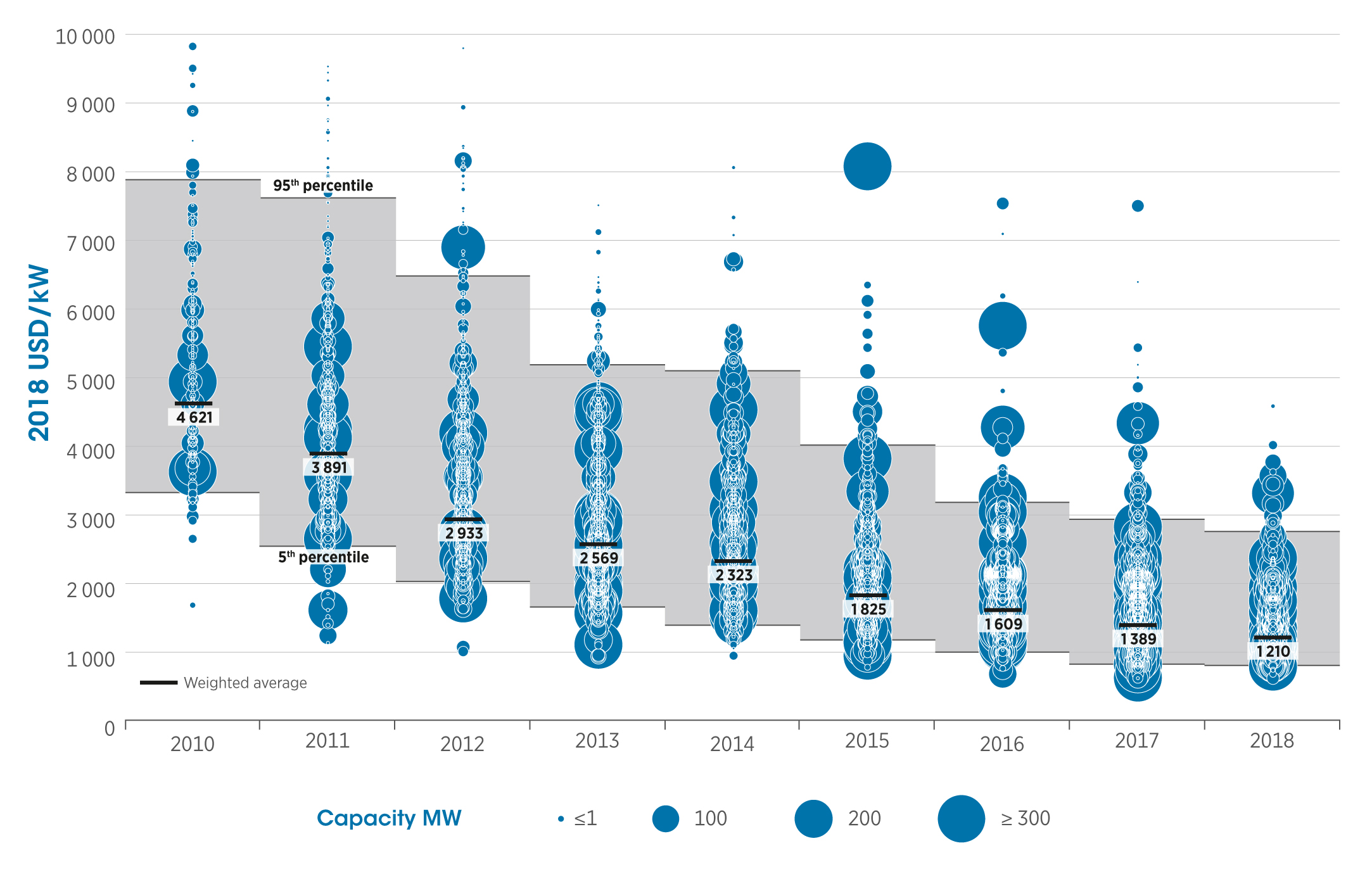 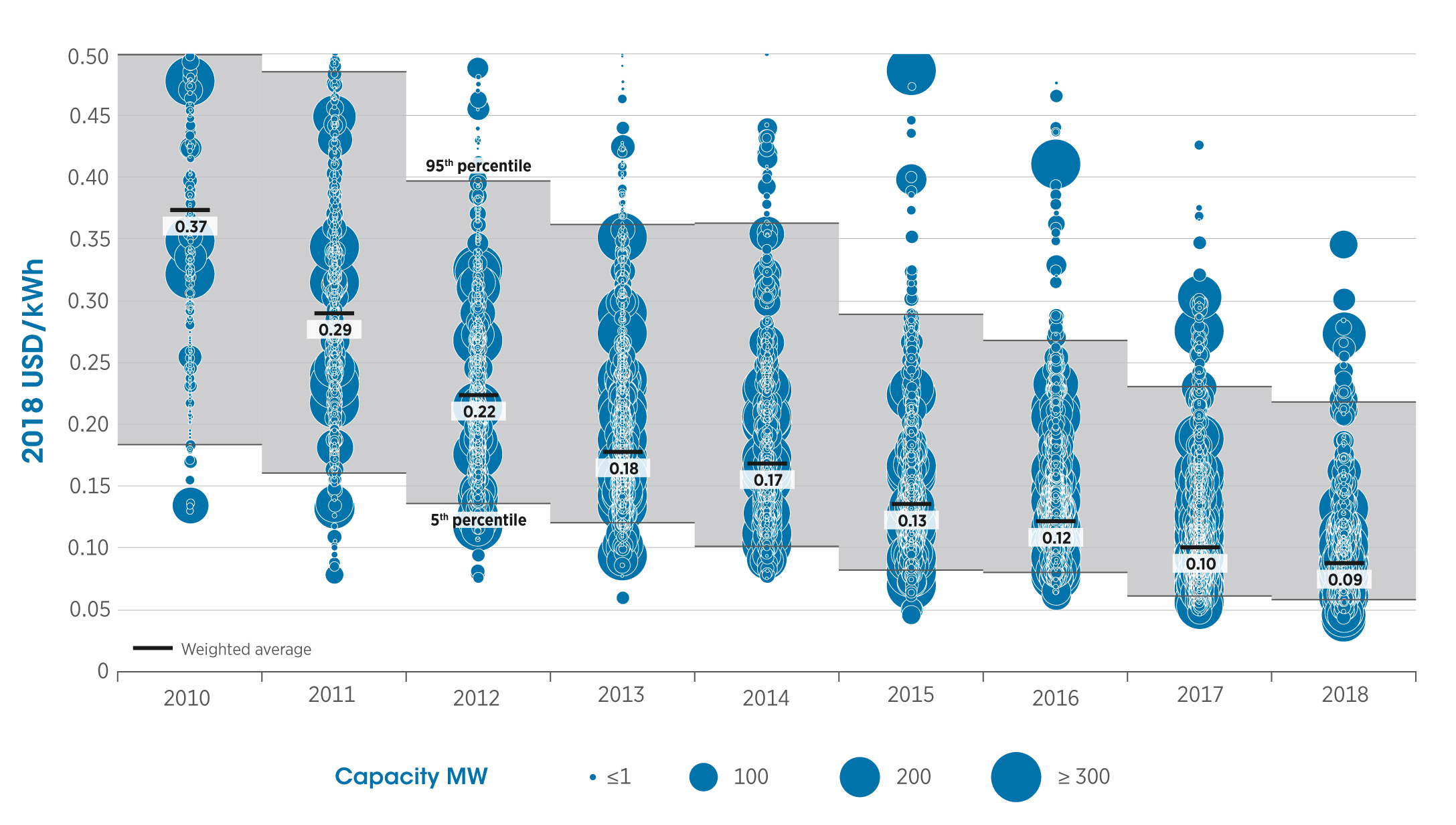 In addition to the so-called energy transit – the transition to energy, obtained mostly from renewables – we expect total electrification. It requires reviewing the forecasts that were valid before. The IRENA report “Global energy transformation: A roadmap to 2050 (2019 edition)”, April 2019, for comparison with the baseline scenario, or “Reference Case, provides a new forecast (reformatted scenario or” REmap Case “) describing an aggressive, but a technically and economically feasible road to the following transformational changes in the energy sector. It shows that accelerated development of renewable energy sources will occur in combination with deep electrification and energy efficiency improvements.

Laboratory samples of silicon panels now produce an efficiency of ~ 26.7%, but the direct decrease in the cost of PV-modules for this reason is not expected. The main factor motivating the spread of PV technology and the total electrification caused by it, becomes the possibility of using electricity in those areas of final energy consumption, where previously used other technologies. First and foremost, these are powerful energy consumers such as transport, construction, housing, district heating, general electricity consumption and industry, including its most energy-intensive species. The electrification will occur in parallel with the decrease of energy consumption due to energy saving, Fig. 7

Fig. 8. Increase in the share of renewables in total final energy consumption, % and GDP / day: primary scenario and reduction in the case of an adjusted "REmap" scenario, taking into account sectoral contributions, 2010-2050. Source: IRENA - Global Energy Transformation Report A roadmap to 2050 (2019 edition), April 2019.

These processes can have a very positive effect on the ecological situation on the planet, until the goal of the Paris Agreement, which was issued a year or two ago to experts, is not yet possible to materialize.

Due to electrification, which will be mainly expanded with the further implementation of PV generation, by 2050, it is possible to achieve practically CO2 reductions under the Paris energy-related agreement, see. Fig. 8. Electrification along with renewables, whose share is increased to 75%, is key; together they constitute 60% of the potential of negative environmental impacts, which together with energy efficiency will reduce emissions by 90%.

If not to mitigate the effects of climate change, it will cost much more to the world economy. IRENA is currently predicting a price of environmental inactivity with an additional cost of $ 96 trillion. Of course, it requires additional efforts and investments, but the global gain of the world economy by 2050 from the implementation of the REmap scenario will be at least $ 65 trillion up to $ 160 trillion.

To balance the demand for electricity and its production, $ 13 trillion will be invested in providing the flexibility of infrastructure and power system, that $ 4 trillion more than in the basic scenario. In addition, the necessary legislative and regulatory changes have been made. The rules for networks and pricing mechanisms for electricity should be changed. This will allow energy consumers to produce and consume their own energy more broadly (turning them into “prosumers”), as well as promoting digitalization, which will help manage network overloads. Investments are also expected in energy efficiency (+0.36 pp / p.), Increase in the electrification of heat and transport (+0.29 pp / p.) and in the expansion of renewable energy sources in the power generation sector for final use (+0 , 16 pp. / P.).

And one should not forget the exclusive role that PV-generation in these processes will play.