Bioenergy: Past, Present and Future

Biomass energy, or bioenergy, is one of the renewable energy sources that can contribute to addressing global climate change, energy security, population growth and a steady increase in energy demand. Bioenergy plays an important role in many low carbon development scenarios and can be particularly useful in long haul transport where alternative energy sources are not available. The expanded role of bioenergy is still under consideration, and sometimes disputes over the sustainability of production and use.

Let’s have a closer look at bioenergy technologies, its current status and future prospects.

Unlike other renewable energy sources, biomass can be converted into liquid fuels – biofuels – for transport purposes. The two most common types of this fuel are ethanol and biodiesel. Ethanol is mainly used as an adjunct to fuel to reduce carbon monoxide emissions and other smog-producing emissions. There are cars that work on a mixture of gasoline (not less than 15%) and ethanol (up to 85%).

In 2015, China became the largest importer of ethanol. However, since domestic production in the Middle Kingdom has increased, tariff barriers have been introduced in the country in early 2017, which has considerably reduced imports. Brazil has also introduced a import quota.

On the contrary, the second largest ethanol production plant in Europe (and the largest in the UK) was disconnected in 2017 due to uncertainty in the market, including the lack of progress in the development of specific proposals in the Kingdom.

As for biodiesel, it is produced by combining alcohol (usually methanol) with sunflower oil, adipose or processed culinary flakes. It is used as an additive for reducing emissions from vehicles (usually 20%) or in pure form as renewable alternative fuel for diesel engines. Other biofuels include components of methanol and gasoline.

International trade in biodiesel has been severely affected by changes in import tariffs. The United States introduced an anti-dumping duty on imports from Indonesia and Argentina.

There are six major types of bioenergy systems ( 2): 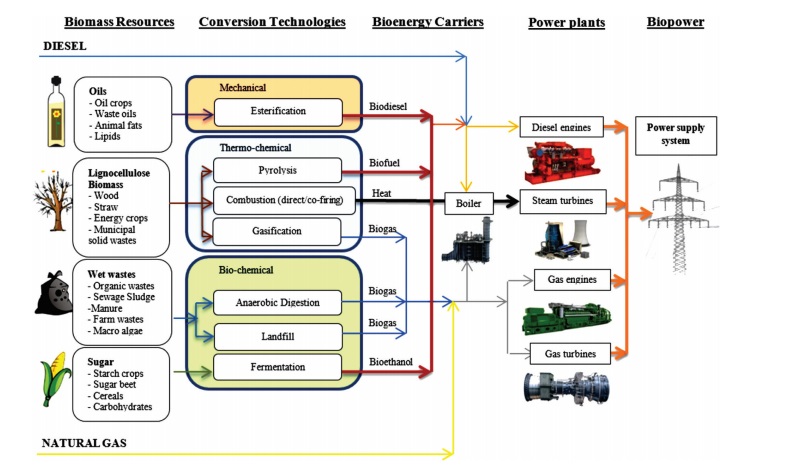 Most bioelectric plants in the world use direct-launch systems. They burn bioenergy raw materials directly for steam production. This pair is usually captured by a turbine, and then the generator turns it into electricity. In some industries, steam thermal energy is also used for industrial processes or heating of buildings. They are known as combined heat and power facilities. For example, wood waste is often used to produce electricity and steam at paper mills.

Many coal-fired power plants use combustion systems to significantly reduce emissions, especially sulfur dioxide. Burning involves the use of bioenergy raw materials as an additional source of energy in high-efficiency boilers.

Gasification systems use high temperatures and lack of oxygen to convert biomass into gas (a mixture of hydrogen, carbon monoxide and methane). The gas feeds the so-called gas turbine, which is very similar to a jet engine, only it rotates an electric generator, but does not spur it.

When decomposition of biomass happens, methane is formed, which is used as a source of energy. For example, in landfills one can drill wells to release methane from decomposable organic matter. Pipes from each well transport biogas to the central point, where it is filtered and cleaned before burning. Methane can also be obtained from biomass in the process, which is called anaerobic digestion. It involves the use of bacteria to decompose organic matter in the absence of oxygen.

Most plants burn methane in steam boilers with a view to generating electricity or for industrial processes. Two new ways include the use of microturbines and fuel cells. Microturbines have a capacity of 25 to 500 kilowatts.

The United States is the largest market for biomethane: fuel production in the country has been stimulated since 2015, when biomethane was first included in the category of high-tech cellulosic biofuels. The consumption of biogas in the USA has grown almost six times from 2014 to 2016, then increased by another 15% in 2017.

In Europe, consumption of biomethane increased by 12% between 2015 and 2016. Production and utilization have been concentrated in Sweden (4.7 PJ), where the production of methane from food waste is encouraged and part of the policy of sustainable waste reduction. Germany (1.3 PJ) – Europe’s second largest user of biomethane in the transport sector (data for 2016).

In addition to gas, liquid fuel can be produced from biomass using a process called pyrolysis. Pyrolysis occurs when biomass without access to oxygen is heated and converted to a liquid that can be burned like oil for electricity generation.

Commercialization of thermal processes, such as pyrolysis and gasification, also advanced in 2017. Enerkem (Canada) has adapted its industrial gasification plant, which processes 300 tons of sorted municipal waste a day to produce ethanol instead of methanol and fuel.

Several bioenergy technologies can be used in small modular systems. Such a system produces electricity of up to 5 MW and is intended for use at a small city or even a consumer level. For example, some farmers use manure to provide electricity.

Whatever products we make from fossil fuels, we can produce them from biomass. The researchers found that saccharides that are part of starch and plant cellulose released by the biofuel production can also be used to make antifreeze, plastic, glues, artificial sweeteners and toothpaste gel.

Other important blocks for biofuels include carbon monoxide and hydrogen. When biomass is heated with a small amount of oxygen, these two gases are produced in sufficient quantities. Scientists call this mixture gas biosynthesis. It can be used for the manufacture of plastics and acids, from which they will then produce films, textiles and synthetic fabrics.

Bioenergy is as old as civilization itself. Wood, manure and charcoal have been used since the discovery of fire by man and to this day – for cooking and heating in many communities in developing countries. Even liquid biofuels – olive oil and whale oil – were widely used in the mid-18th and early 19th centuries.

The first cars were created to work on biofuels. The first internal combustion engine, patented in the United States in 1826, is designed to work on a mixture of ethanol and turpentine (derived from pine trees). Henry Ford developed his original T 1908 model for ethanol, and Rudolf Diesel intended to refill his engine with vegetable oil.

In the middle of the 1800s, coal became widely available, kerosene (the first combustible hydrocarbon liquid) was invented, and the drilling of the first commercial oil wells began. Consequently, a large stock, low price, efficiency and practicality of fossil fuels reduced appetite for biofuels at that time.

During the First World War, oil shortages led to an increase in demand for ethanol, which, as it turned out, could be mixed with gasoline to produce the corresponding motor fuel.

Since the 1970s, a series of oil crises has given rise to a renewed interest in biofuels. This prompted the US and Brazil to begin its modern large-scale production. Over the past 10 years, biofuels have been used to address global problems in the world: reduced fossil fuel supplies, high oil prices and climate change.

The current state of the industry

During 2017, several countries introduced policies to support the production and use of bioenergy. For example, in Brazil this is the RenovaBio initiative. In the same year, India made a major initiative to raise domestic production and use of biofuels. On the contrary, in the European Union, there is a debate about the role of bioenergy in the EU directive with restrictions on “food-based biofuels”. The amount of bioenergy consumption by sector is different, see Fig. 3

Germany is the largest consumer (0.52 EJ) of biofuels in the EU, followed by France (0.45 EJ), Sweden (0.36 EJ), Italy (0.32 EJ) and Finland (0.30 EJ). Since 2007, the thermal energy consumption from biomass has grown by more than 30% in the EU. The fastest growing market for this period is the United Kingdom, where biofuel consumption has grown more than five times due to the British program to stimulate the use of renewable sources of heat. Europe is the largest consumer of modern biofuels. In 2016, the EU used about 3.6 EJ of heat from biomass (Fig. 4). 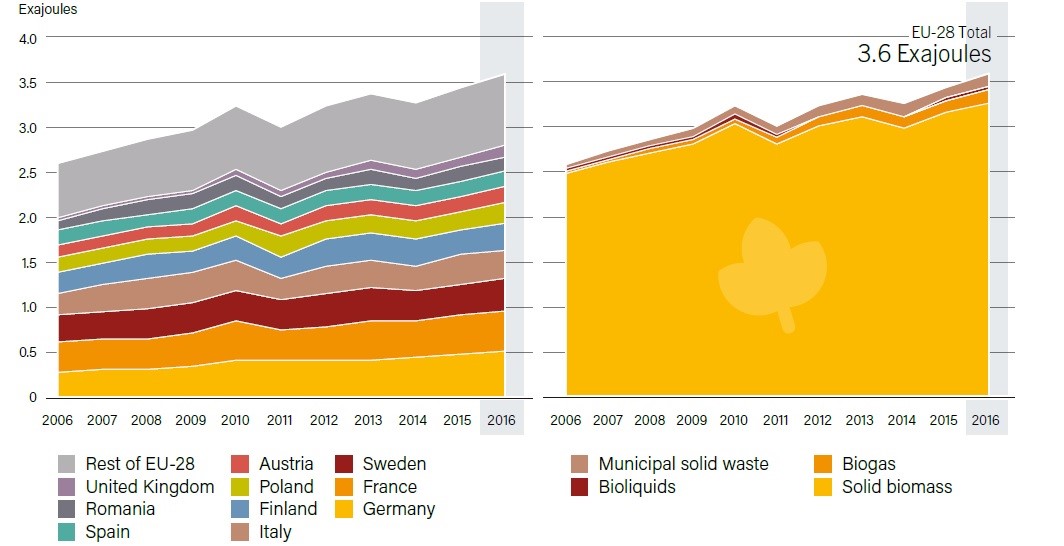 More than 50% of global biofuels use in industry is in three countries: Brazil, India and the USA. China has used about 8 million tons of biomass (equivalent to 120 PJs) in the industrial sector in 2016 and plans to increase to 30 million tons (450 PJ) by 2020.

The global power of bioelectricity (biomass generation) increased by 7% between 2016 and 2017 to 122 GW. The total development of bioelectricity in the world has increased by 11% in 2017 to 555 TWh. China has now overtaken the United States as the largest bioelectric producer. Also, major world producers are Brazil, Germany, Japan, Great Britain and India (Fig. 5).

Modern bioenergy will have the largest increase in renewable resources in the period from 2018 to 2023, which emphasizes its crucial role in creating a reliable RES portfolio and ensuring a more secure and sustainable energy system, according to the latest forecast of the International Energy Agency market (Fig. 6, 7). 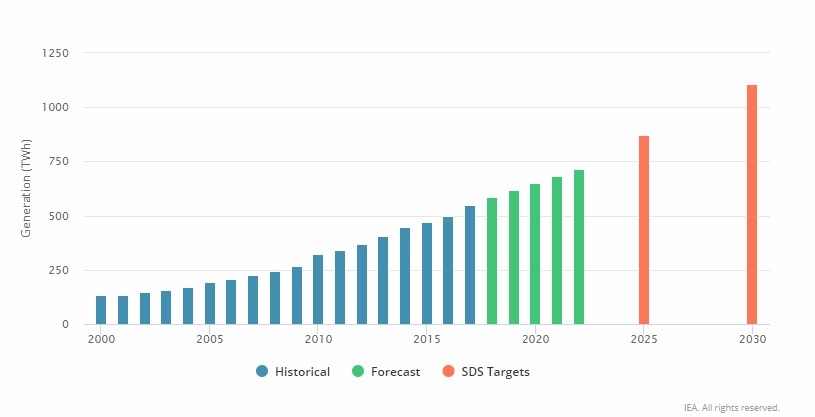 In the long-run perspective, bio-energy plays an important role in the low-carbon energy system. It is forecasted that modern bioenergy in the final total energy consumption by 2060 will increase fourfold (Fig. 8). This is described in the possible scenario of IEA at 2 ° C (2DS), which seeks to limit the increase in global average temperatures by more than 2 ° C by 2100 to avoid the worst effects of climate change. Under this scenario, bioenergy plays a particularly important role in the transport sector, which helps to decarbonise long-haul freight (including aviation and maritime). 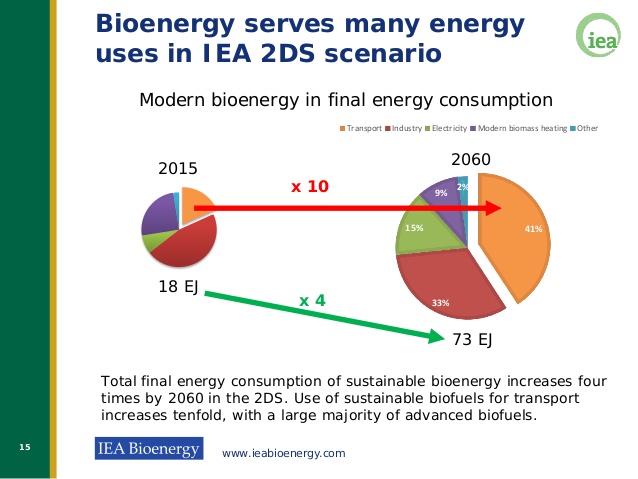